Studying how galaxies evolve takes more than just observing them and noting their properties. A notable part of an astronomer's job is about constructing physical models that explain the observed behavior. Read here how PhD Mikkel Stockmann contributed to increasing our knowledge about galaxy evolution 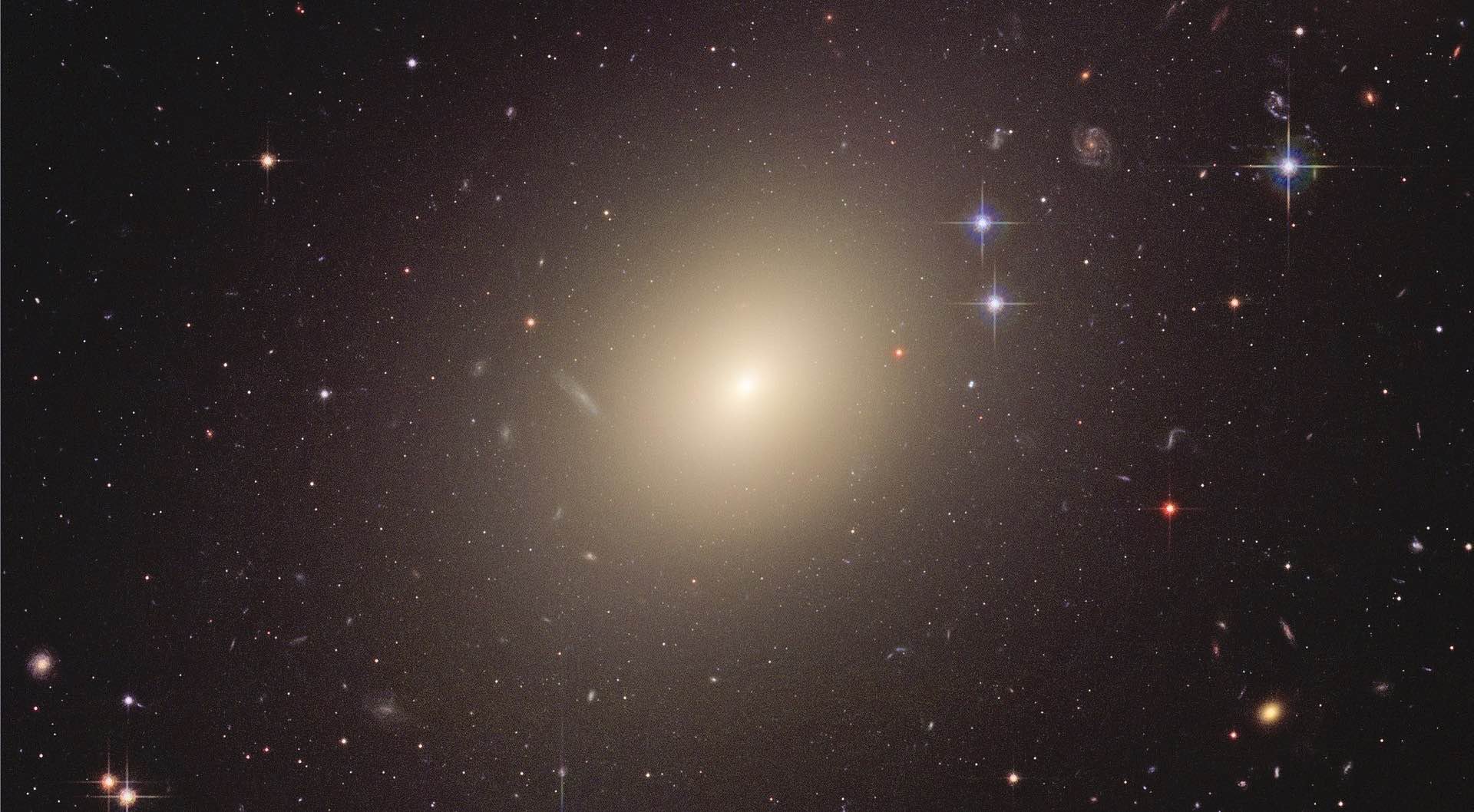 The Cosmic Dawn Center is devoted to studying the formation and evolution of galaxies, in particular the most massive, elliptical galaxies. Such a study involves investigating the relations, if any, between their various physical properties — for instance their size, stellar populations, amount of dust, rotation, morphology, and what not.

It turns out that, in the present-day Universe, there is a tight relation between three such properties, namely the galaxies' size, mass, and brightness. In other words, if you measure two, you almost get the third for free.

This relation is known as "the Fundamental Plane" of elliptical galaxies. Plane, because when these properties are plotted in a 3D coordinate system, they fall in a rather flat, 2D region. Don't worry if this sounds confusing; we'll get back to it further down where we'll visualize the Plane.

Relating these three properties requires us to define them properly:

Galaxies are a mix of stars, gas, and dust, as well as the invisible dark matter. As you travel from the center and out, the density of these components decrease, but you will never get to a point where they reach zero.

How, then, do you define the size of a galaxy?

There is no "correct" way to specify its size, and different definitions are used, depending on what you use it for. One way could be to define its radius as the region within which a certain fraction (say, 99%) of its mass is located. But observationally, this is not easily determined — we don't weigh galaxies, we observe their light.

Hence, another definition is typically used, namely the radius of the region within which half of its light is emitted. As long as we use the same definition, we can compare galaxies to each other.

There is no "correct" way to specify its size, and different definitions are used, depending on what you use it for. One way could be to define its radius as the region within which a certain fraction (say, 99%) of its mass is located. But observationally, this is not easily determined — we don't weigh galaxies, we observe their light.

Hence, another definition is typically used, namely the radius of the region within which half of its light is emitted. As long as we use the same definition, we can compare galaxies to each other. 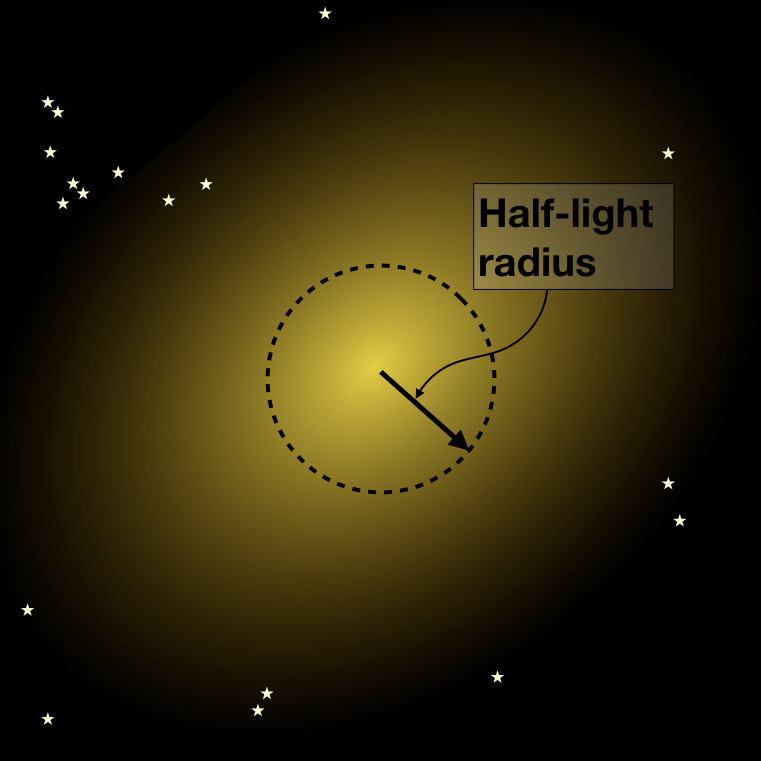 To be able to compare the size of galaxies, often the so-called "half-light radius" is used; the radius within which half of the galaxy's light is emitted (credit: Peter Laursen).

Galaxies are bright because they're full of stars (although the stars are sometimes outshone by other luminous stuff such as quasars). If truth be told, the Fundamental Plane relates the galaxies' size with 1) the galaxies' surface brightness — that is, the brightness per area— and 2) the velocity of the stars moving around inside them. But since area depends on size, and since the stellar velocities depend on the galaxies' mass (stars move faster in massive galaxies), we can use some clever algebra to express the Fundamental Plane in terms of size, brightness, and mass. These quantities are a tad easier to grasp.

Whereas size and brightness are measured relatively effortlessly, however, the mass is less easily determined. Especially because the largest part of a galaxy's matter is dark matter. But even though it cannot be seen, it affects the velocity of the stars.

The Fundamental Plane of elliptical galaxies

What is the origin of the Fundamental Plane? Was it always like this? If not, when did galaxies evolve to establish the relation? And how does the relation change with time? These are questions that puzzle astronomers.

During his PhD studies at DAWN, Mikkel Stockman investigated the Fundamental Plane, particularly its evolution, pushing observations back to unprecedented early times. The fact that the three properties are not randomly distributed over all possible values, but fall in a narrow Plane, means that they are connected. This is perhaps not surprising in itself, but when this Plane apparently exists not only today, but also in the past, things get interesting:

"If such a Plane exists, it tells us that these galaxies evolve in a similar fashion", says Mikkel Stockmann. "And the earlier epochs we see this Plane, the earlier this type of galaxies must have formed".

As we look deeper into the Universe, we also look farther back in time, since the light from distant galaxies takes time to reach us. In his latest paper, Mikkel Stockmann and his collaborators — a team of international astronomers — compared the physical properties of elliptical galaxies in the present-day Universe (that is, "local" galaxies) to the properties of galaxies many billions of lightyears away, seen more than 10 billion years in the past, closer to their date of birth.

He then presents a physical model that explains how the size, mass, and brightness of elliptical galaxies evolve from 10 billion years ago to today — that is, how the Fundamental Plane evolves.

The model is based on our current understanding of the build-up of galaxies, the evolution of stellar populations,  the mixture of dark matter with "ordinary" matter, and other well-founded physics. 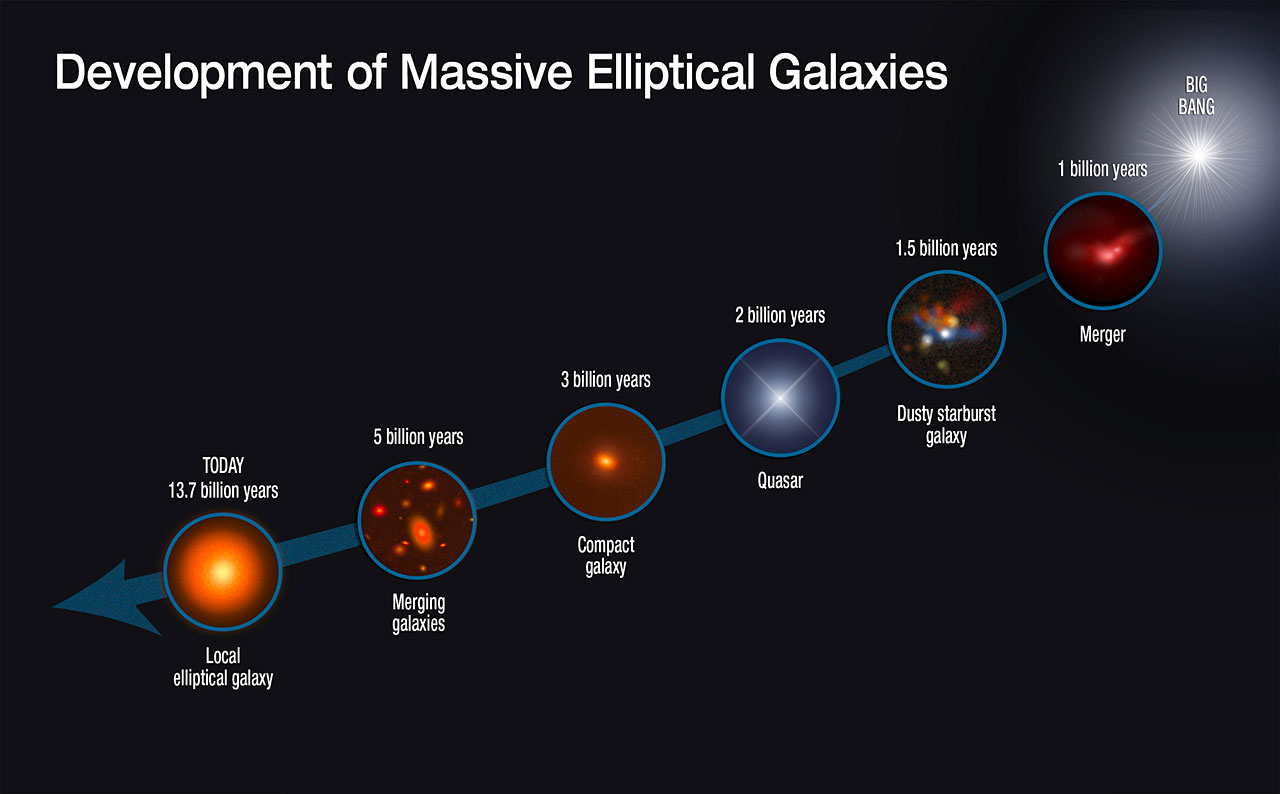 Evolution timeline of massive, elliptical galaxies. In the research described in this article, we will take a closer look at the last three steps (credit: NASA, ESA, Sune Toft, & Ann Feild).

Mikkel Stockmann argues in his paper how galaxies evolve simultaneously through different mechanisms:

The first mechanism may be called passive evolution, as it occurs via "internal" processes. For reason that are a full-blown study in itself, elliptical galaxies cease to form new stars at an early age. This is in contrast to the more active spiral galaxies — such as our own Milky Way — that keep forming stars. As time goes, more and more stars die out, meaning that the galaxy's brightness decreases.

At the same time galaxies grow, both through a smooth accretion of new gas and dark matter from the intergalactic space, as well as through devouring smaller galaxies. This mechanism actively changes the structure of the galaxy, increasing both its mass and its radius. Clearly, adding more stars to the galaxy also increases its brightness, but mass increases faster, so the mass-to-light ratio increases.

In principle, this bombardment of smaller galaxies might be thought to increase the larger galaxies' stellar velocities as well, and this was in fact also thought previously. But in an earlier paper, Mikkel Stockmann showed that this is in fact not the case.

Visualizing the Fundamental Plane can be a bit tricky, because it consists of three variables (size, mass, and brightness), and so forms a 3D "space". Sometimes we therefore consider only two variables at a time. Another rather enlightning way is to consider a "mixture" of two of the variables and compare this to the third variable.

An example of this would be to compare the mass-to-light ratio — that is, a galaxy's mass divided by its brightness — to its size. This is shown in the figure below. 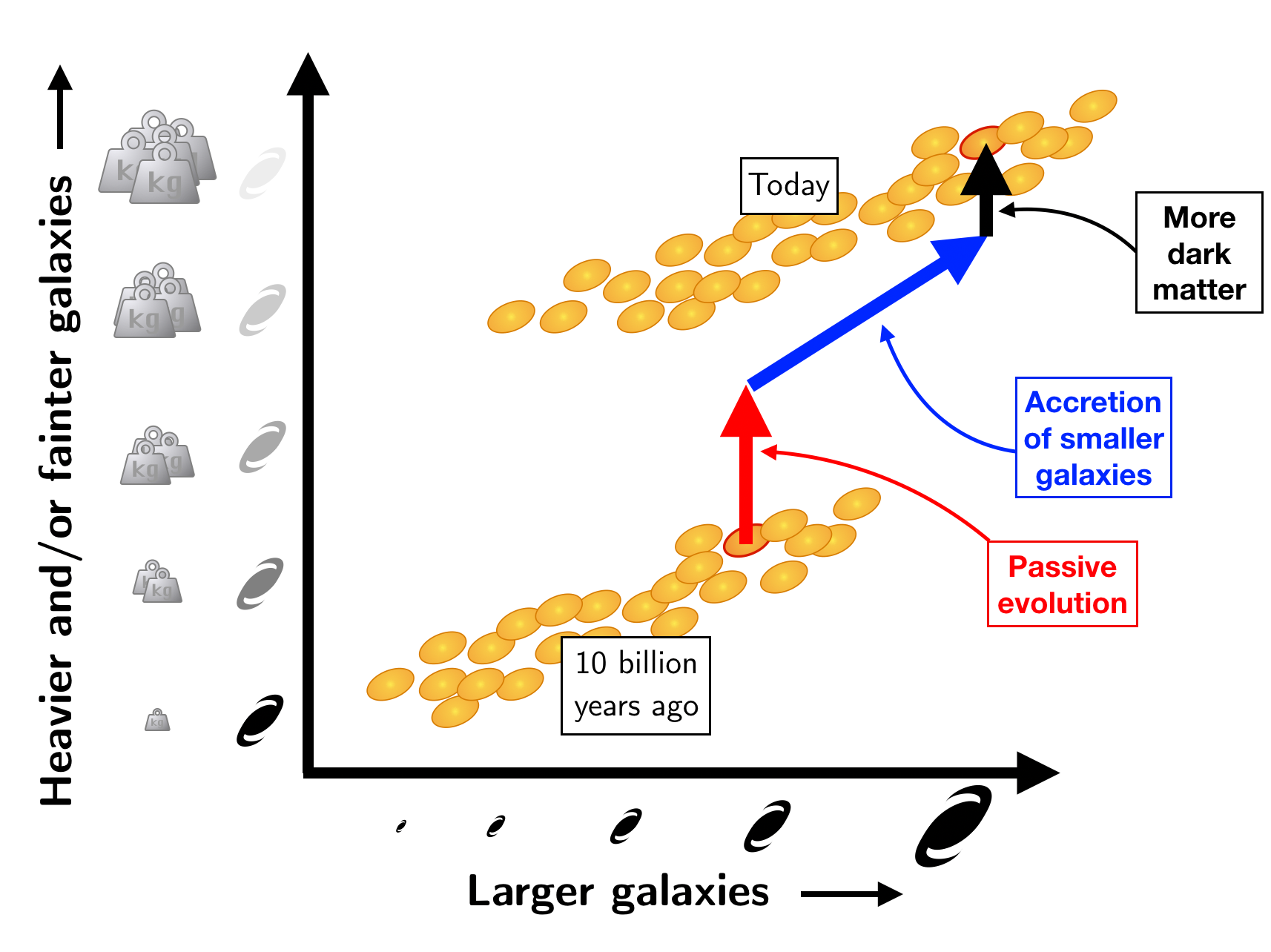 A lot is going on in this figure, so let's take a closer look:

The orange ellipses represent galaxies. The farther they are to the right, the larger they are, according to the observations. Being higher up can mean they the are either more massive, or that they are fainter. Or both.

The galaxies fall in two groups — the ones in the bottom are observed properties of the distant galaxies, seen 10 billions years ago, while the upper group represent local galaxies, seen roughly like they are today.

In both cases, the galaxies are seen to fall in a rather narrow range — this is in fact the Fundamental Plane "seen from the side", so to speak. If this makes little sense, try viewing the 3D version below:

The Big Question now is, how did the galaxies go from populating a region in the bottom left of this diagram, to the top right. And Mikkel Stockmann offers an explanation.

"If we aim to understand how and when these galaxies were born — which is something that the Fundamental Plane helps us with — we can figure out which type of galaxies we must study in order to find the progenitors of the ones that will later become the most massive galaxies in the Universe", Mikkel Stockmann says. "We can study how they formed, and thereby better understand galaxy evolution".

These mechanisms can explain most of the evolution over the last 10 billion years. Most, but not entirely. When doing the actual math, Mikkel Stockmann calculated that, seemingly, we still "need" the galaxies to move a little farther up in the diagram. That is, the galaxies observed in the present-day Universe are either a little fainter, or a little more massive, than Mikkel Stockmann's model suggests.

As time goes, galaxies tend to "condense". That is, its matter tends to become more concentrated in the central parts. Dark matter adds to the total mass, but it doesn't emit light, and it doesn't collide with neither itself, nor with the normal matter.

This in turn means that, as the radius inside which we measure the light increases, we enter regions of more mass, but not more light. In other words, the ratio between the two increases. This is enough to push the Fundamental Plane up where it should be, according to the observations. This mechanism is depicted by the black arrow in the diagram.

With this model, it seems that we are getting closer to understanding how the elliptical galaxies evolve.

The paper describing these new findings (and others) has been accepted for publication in the Astrophysical Journal, and can be read here: arxiv.org/abs/2012.05935.