DAWN's research is focused on the specific period in the history of the Universe known as the Cosmic Dawn. This previously unexplored period, 300–600 million years after the Big Bang, is when the first stars, black holes and galaxies is believed to have formed.

The Cosmic Dawn Center is involved in a number of observational surveys, utilizing multiple instruments and telescopes. The abundant data emerging from these tools is analyzed through both theoretical models and numerical simulations. 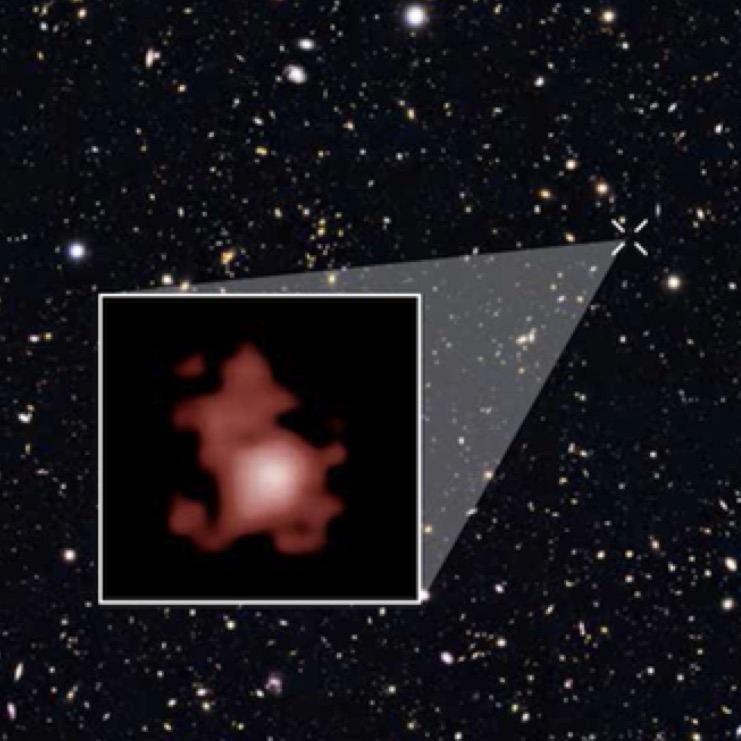 Galaxies are the building blocks of the Universe, and understanding how, and how soon, these enigmatic structures of gas, stars, and dark matter arose, is an observationally challenging task, since it involves detecting the faintest sources, almost at the edge of the observable Universe.

The currently most distant — and hence earliest — galaxy is seen at an epoch where the Universe was only 400 million years old, 3% of its current age. The first stars were formed at half this age, but have not yet been observed directly.

DAWN is involved in the James Webb Space Telescope (JWST), which will be launched in October 2021, providing unprecedented deep exposures of some of the very first galaxies and protogalaxies. 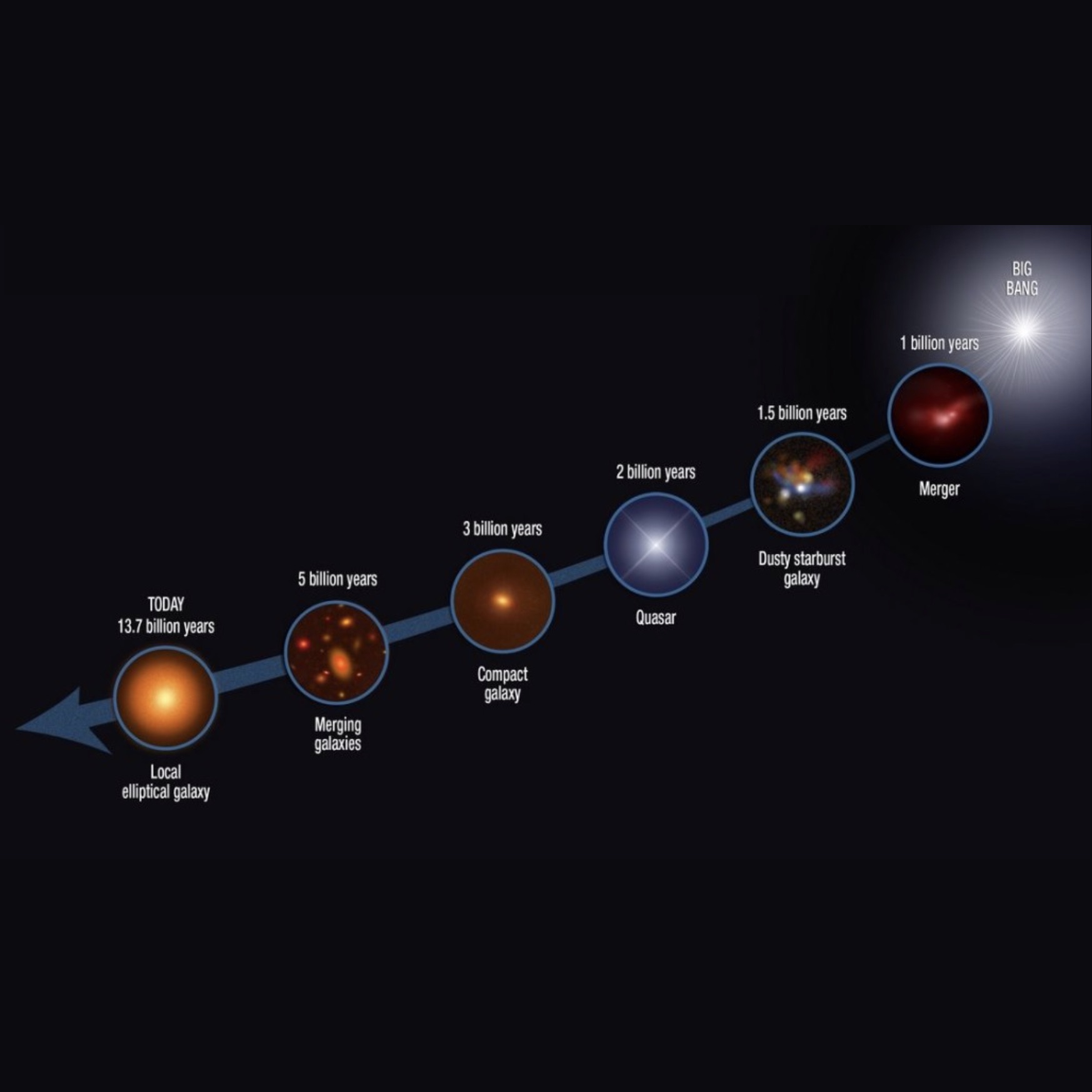 Galaxies evolve through both internal and external processes: Gas is converted to stars which pollute the interstellar medium with heavy elements, some of which form dust grains. Spiral arms form, and gas is ejected as galactic winds, triggered by the feedback of stars and quasars. At the same time, galaxies accrete new gas from the intergalactic medium, and merge with other galaxies.

The interplay between these processes determines the fate of a galaxy — whether it will turn out a flat and star-forming spiral galaxy, an elliptical, red and "dead" galaxy, or something else.

The evolution takes place over timescales of hundreds of millions of years, and hence cannot be observed "live". But studying the statistical properties of large samples of galaxy populations through observational surveys and theoretical modeling, DAWN continuously contributes to expand our cosmological horizon. 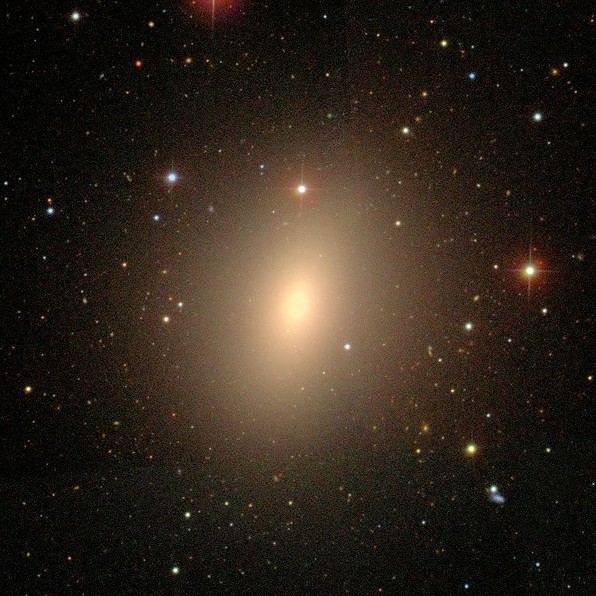 Some galaxies continue to form stars from the time they are formed and until today. The beautiful bluish spiral galaxies are an example of this. However, others — typically the most massive and elliptical galaxies — at some point cease to form stars. As the short-lived, blue stars die out and the long-lived, red ones remain, these galaxies get their characteristic orange-reddish color.

What is the cause of this so-called quenching? When did it happen, and why doesn't star formation stop in all galaxies? What is the role of galaxy merging versus the role of stellar feedback and active galactic nucleus activity? These are questions that DAWN seeks to answer, using telescopes such as the Atacama Large Millimeter Array and the Very Large Telescope. 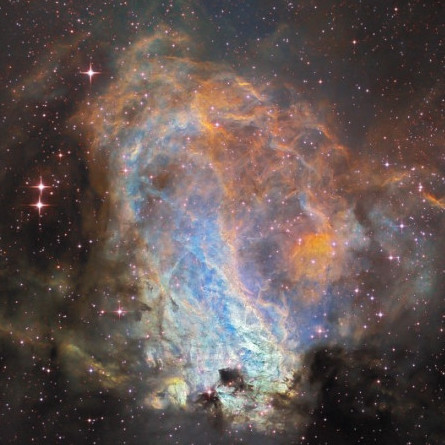 Whether stars die with a whimper or with a bang, they return their gas to the space in between them, only now it is polluted with heavier elements, or metals.

These elements are important in several ways: Not only the metals themselves, but also the molecules and the dust that they form, affect observations both in emission and in absorption. Acting as a coolant, they facilitate star formation, and through the many electronic transitions of metals and molecules and the large cross sections of dust grains they engender massive outflows through stellar and galactic winds.

These processes are interesting in themselves, but also have major impacts on the evolution of galaxies. Analyzing the interstellar medium is thus pivotal to understand galaxies. Notably, DAWN searches for signatures of some of the first molecules to form, such as carbon monoxide. 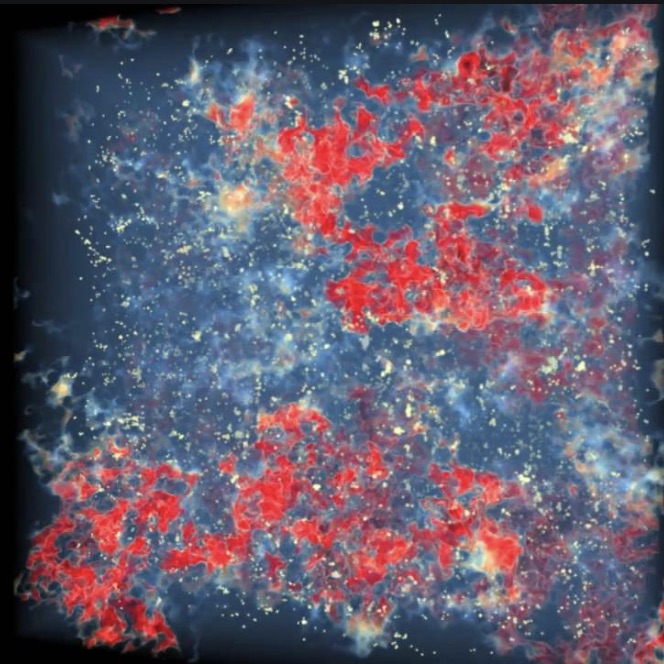 In addition to all the action happening in the Universe in the form of planets forming, stars exploding, galaxies forming, etc., through its history the Universe has also experienced a number of global transitions. Most of these took place in the early Universe, in particular during the Big Bang.

When the Universe had cooled enough that neutral atoms could form, it remained neutral for several hundred millions of years. However, roughly half a billion years after the Big Bang, a global phase transition took place, where the entire vast space between the galaxies was re-ionized.

The sources of the ionizing radiation was probably hot stars in the first galaxies, but quasars also played a role. The transition was fast, cosmologically speaking, but exactly how did it progress? And how clumpy was the reionization? Before the epoch of reionization, light from galaxies has a hard time traveling through the Universe, but if reionization happened in a percolative manner, with large ionized bubbles around some galaxies, these may still be detected. DAWN investigates this interesting epoch in particular through numerical simulations.