DAWN in the media

DAWN in the media

DAWN takes pride in explaining both our own research, and astronomy in general, to the public. Below is a list of our previous media appearances (note that much of the material is in Danish).

Are you a journalist looking for a comment, an explanation, an opinion, or a full interview, please get in touch:

Charlotte Mason appearing in a short DR documentary about the Hubble Space Telescope:

On Christmas Day 2021 NASA launched the Hubble telescope's successor: the James Webb Space Telescope, which will help humanity look further back in time and hopefully gather a better understanding of the universe's origin.

Watch the commentary on TV2-Play

Everything in the Universe is built of little particles

As a part of the Ministry of Educations' strategy to increase school pupils' interest in science ("Naturvidenskabens ABC"), 10 researchers explain 10 scientific insights, and their own relation to these insights. This is DAWN's contribution:

Johan Fynbo, Professor at DAWN, talks about the foundations and history of the study of galaxies and cosmology and why we want to continue pushing the boundaries of astronomy on this video from one of our main contributors, Carlsbergfondet:

Jonatan Spang, the host of the Danish satire show Tæt På Sandheden, contacted DAWN to learn how big a "romkugle" he could donate to our Prime Minister, Mette Frederiksen (spoiler: As you add cake, at roughly 50,000 km it begins to shrink rather than grow, and as it reaches 30,000 km, it turns into a star).

The Planetarium in Copenhagen is celebrating it's 30th anniversary, and an event where eight physics professors, postdocs and PhD will discuss which area of physics is actually the best will be held with participation of Peter Laursen and Thomas Greve of DAWN. Drop by and check it out. There will be researchers representing everything from new aerospace technology to galaxy formation (yay),  cosmoclimatology and exoplanetary studies.

The format of the event will be of a "Rapping Fight Night", a real Science Slam!

The Bishop Sisters on the hunt for God

Johan Fynbo has talked to Tine Lindhardt about his relation to science and God. 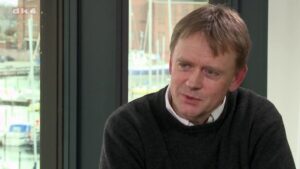 5 things you must know about galaxies

A video in videnskab.dk's series about researchers telling the top five most important facts about various topics.

In addition to comments in interviews, we also sometimes write our own popular science articles.

Astronomers observe the same supernova at three different  points in the sky – predictions say there will be a fourth sighting in 16 years. (2021)