Hubble finds distant galaxies that ran out of fuel

Hubble finds distant galaxies that ran out of fuel

Using the Hubble Space Telescope, the ALMA radio telescope, and a "cosmic telescope" consisting of a massive cluster of galaxies, astronomers at DAWN have found six galaxies in the early Universe that have run out of gas to make new stars. Exactly how they ran out is a bit of a mystery. The study has just been published in Nature. 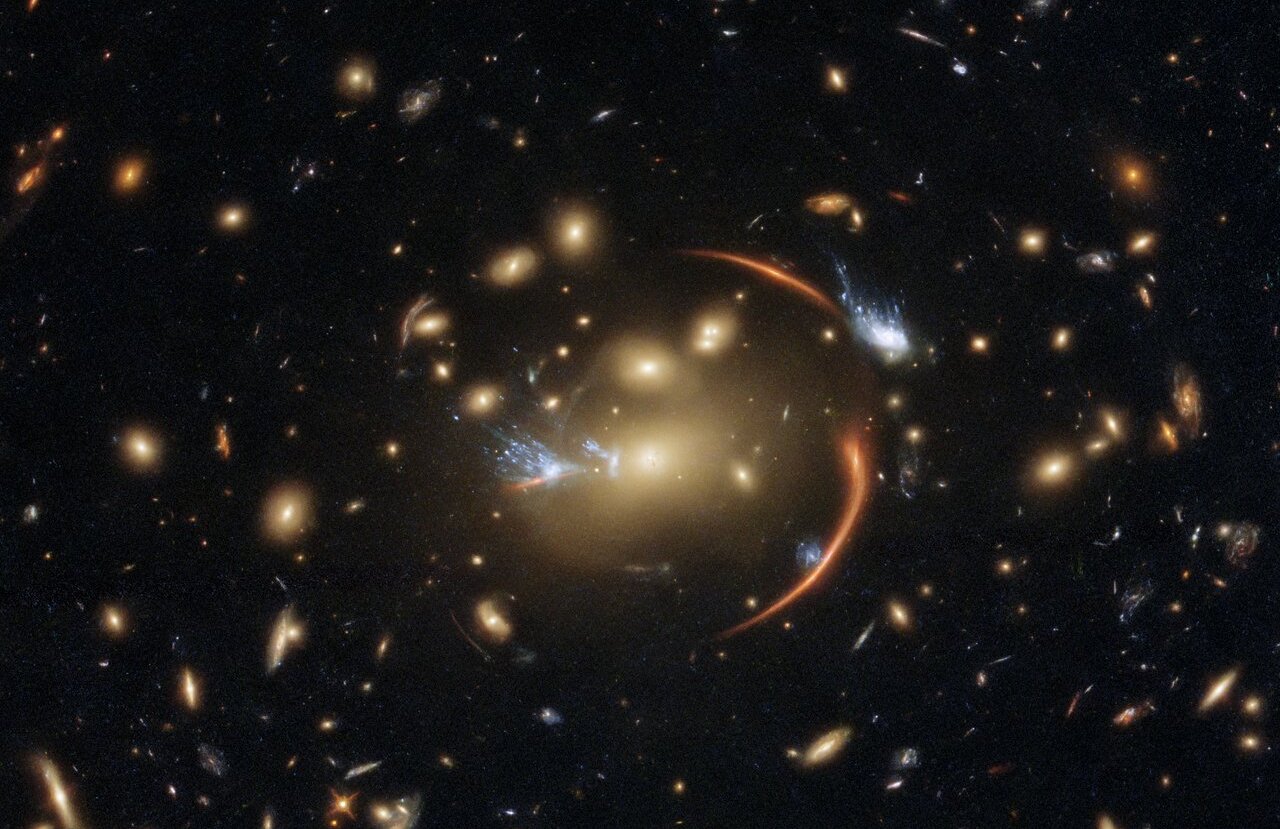 The galaxy cluster MACSJ0138.0-2155 magnifies and distorts the image of a galaxy at a distance of 17 billion lightyears, enabling astronomers to study it in great detail (credit: ESA/Hubble & NASA, A. Newman, M. Akhshik, K. Whitaker).

Galaxies are full of stars, and stars are made from gas.

Nowadays, some galaxies have run out of gas for one reason or another, and hence stopped forming new stars, while others, by reusing gas from old stars or by accreting new gas from intergalactic space, are able to continue to form new stars.

Most stars were created in the early Universe when it was 1/5 of its current age, about 2–4 billion years after the Big Bang. Because light from distant galaxies takes time to reach us, we look further back in time the farther we look into space. If we look 10–12 billion years back in time, we therefore see predominantly strongly star-forming galaxies.

But now a team of astronomers, led by assistant professor Kate Whitaker from University of Massachusetts Amherst and associate faculty at the Danish Cosmic Dawn Center at the Niels Bohr Institute and DTU Space have, observed six massive galaxies in exactly this period which have mysteriously already used up their gas and stopped forming stars. The observations challenge our understanding of star formation and galaxy evolution.

The observations that show these galaxies running on empty have been carried out with an array of radio antennas in Chile, called the Atacama Large Millimeter Array, or "ALMA". In order to find the galaxies in the first place, astronomers have taken advantage of the Hubble Space Telescope's high resolution.

Moreover, with the marvelous phenomenon known as "gravitational lensing", the astronomers were able to study this type of galaxies in unprecedented detail. The gravitational lenses in these six cases are intervening clusters of hundreds of galaxies, which with their enormous mass curve space itself so much that it focuses the light from the distant galaxies towards us.

This "cosmic telescope" magnifies the six galaxies and amplifies their light up to 30 times, allowing Kate Whitaker and her group to constrain the amount of gas to much lower limits than has previously been possible.

Requiem for a galaxy

What makes some galaxies stop forming stars and become inactive, or "quiescent", is an open question in astronomy. A criterion for star formation is that the galaxy must contain enough gas, and that this gas must not be too hot, because hot gas clouds are unable to clump and collapse into stars.

So while the discovery is long-yearned for, it is not a huge surprise to the astronomers.

"For a long time, we have suspected that running out of gas is one of the main reasons that some galaxies cease to form stars", explain Georgios Magdis, associate professor at the Cosmic Dawn Center and part of the team that discovered the six galaxies. "But now we have the evidence."

Detecting gas in distant dead galaxies is usually close to impossible because the galaxies are both too faint and too small to see sufficiently small details. But in an observational program — appropriately dubbed REsolving QUIEscent Magnified (REQUIEM) Galaxies — Kate Whitaker and her colleagues have nevertheless found some of these peculiar galaxies.

"By using strong gravitational lensing as a natural telescope, we can find the distant, most massive and first galaxies to shut down their star formation", Kate Whitaker explains.

Why the six REQUIEM galaxies shut down is still not clear.

"Did a supermassive black hole in the galaxy's center turn on and heat up all the gas? If so, the gas could still be there, but now it's hot. Was the gas blown out of the galaxy? Or did the galaxy simply use it all up? These are some of the open questions that we'll continue to explore with new observations down the road."