In the center of most galaxies lies a supermassive black hole. Some of these are actively feeding on the gas and dust around them, expelling excess energy as powerful jets that are seen as quasars across the entire observable Universe. A new study led by astronomers at the Cosmic Dawn Center reviewed this process using new techniques — and the results may change how we think about the diets of these cosmic behemoths. 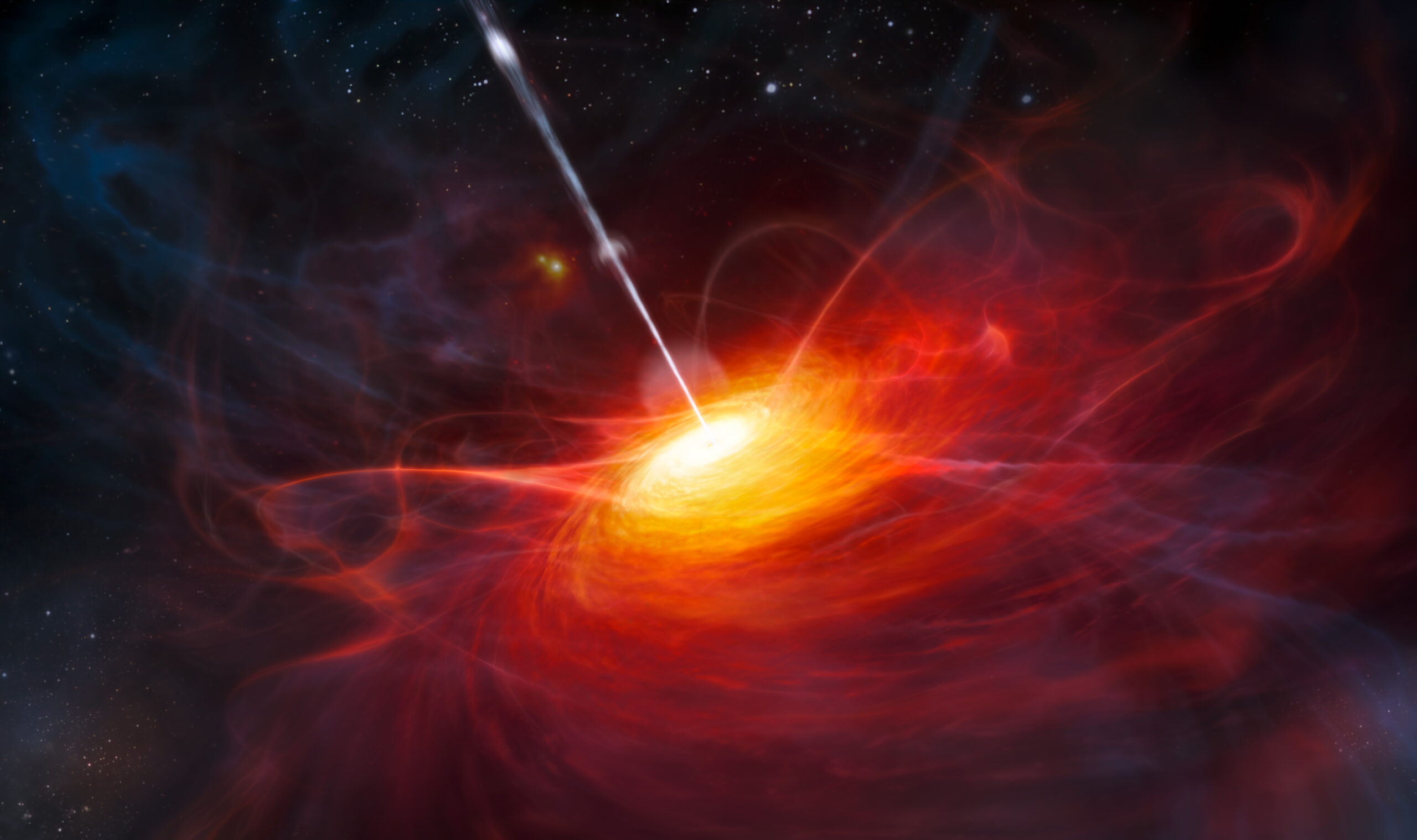 Located in the center of galaxies, supermassive black holes are millions or even billion times more massive than our Sun. With their extreme gravitational pull, they are able to engulf vast amounts of gas, dust, and perhaps even stars that wander into their vicinity.

Physics tells us that this material tends to form a disk as it is drawn towards the black hole in a phenomenon called “accretion”. Now these accretion disks are some of the most uninviting, violent places in the known Universe, with velocities approching the speed of light, and temperatures far in excess of the surface of our Sun. This heat produces radiation which we see as light, but the conversion of heat to light is so efficient —about 30 times more efficient than nuclear fusion — that physicists don’t quite understand how.

The dietary patterns of black holes have wide range. Some, like the one in our own Galaxy, aren’t very hungry and don’t seem to have accretion disks. But we see other galaxies with ravenous hunger whose supermassive black holes have grown extremely hot accretion disks so bright that they outshine all of the stars in their galaxy 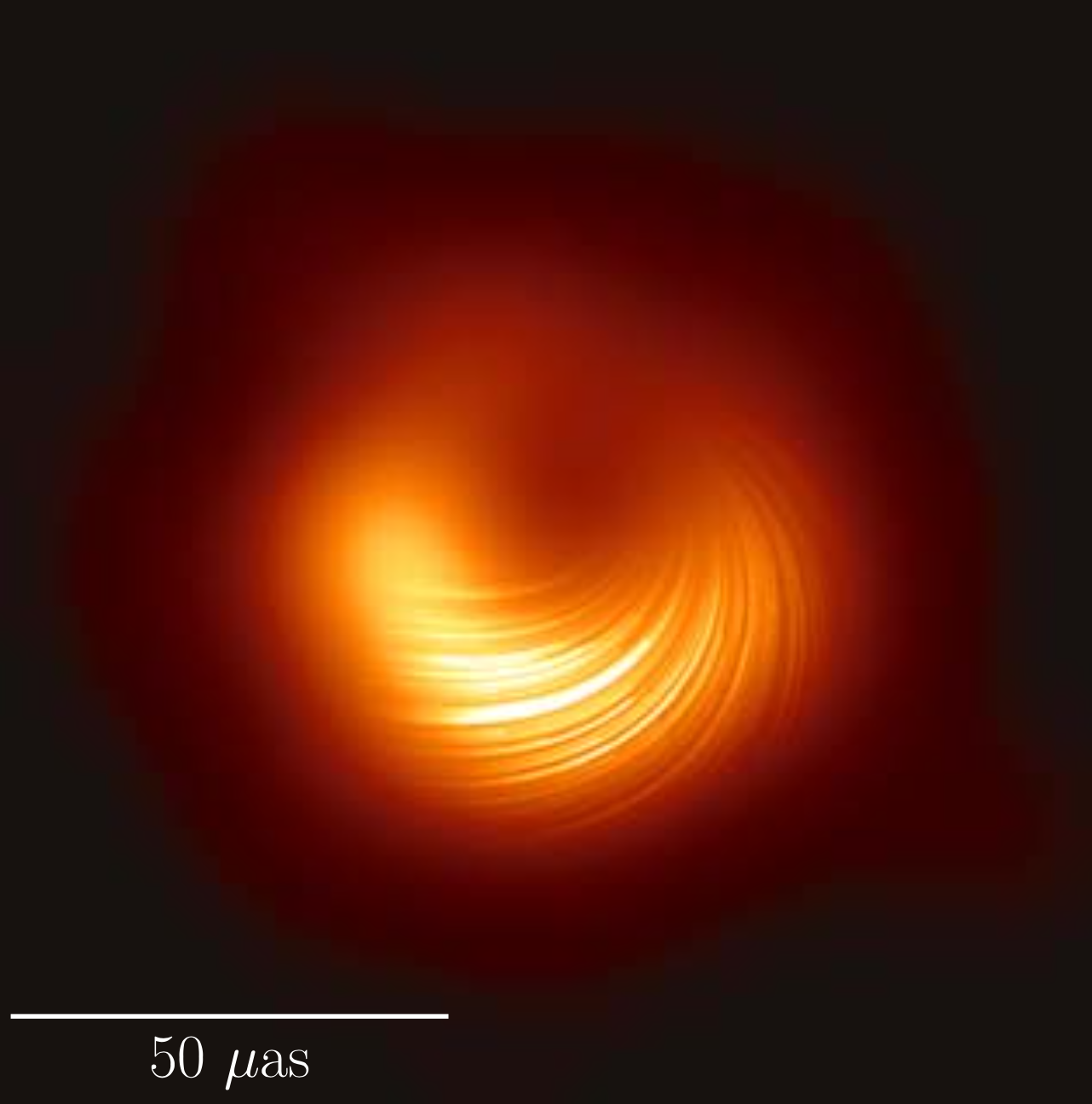 The supermassive black hole in the center of the galaxy M87. The streaks show the polarized light from the electric field of the gas plummeting into the black hole. Whereas the picture in the top of this article is a drawing, this is a real black hole (credit: EHT Collab. et al. 2021).

Only recently have we obtained our first picture of an accretion disk from the Event Horizon Telescope, a worldwide network of radio telescopes. However, this accretion disk belongs to a very nearby galaxy. We cannot repeat this experiment with more distant galaxies as the disks are simply too small and so are unresolved, even by the largest telescopes

Fortunately another method of probing the size and structure of distant accretion disks seems promising: Although we cannot resolve the disks' various components, we can study how its intensity varies in time. By studying the variations in the disks' light we can piece together a picture of the accretion disks of even the most distant galaxies.

This is what DAWN PhD Fellow John Weaver has done, looking into past observations of more than 9,000 galaxies with bright accretion disks — the so-called quasars — from the observational program "Sloan Digital Sky Survey".

In other words, the model allowed them to more directly see the light from the accretion disk around supermassive black holes, even in galaxies billions of lightyears away.

This difference in temperature between the hot inner disk and the cold outer disk has been theoretically predicted. However, what Weaver and Horne found observationally was a very different picture of the temperature of the disk: the disks turned out to be even hotter near the black hole than predicted. These unexpected findings were published today in the Monthly Notices of The Royal Astronomical Society and suggest that our assumptions and theoretical models need to be revised — with consequences for our understanding of supermassive black holes altogether.

Not only do we have more to learn about supermassive black holes, but the variations in their ravenous hunger are a marvelous demonstration that our Universe is a far more dynamic place than one would expect looking at the static night time sky.