While developing and testing astronomical software on existing data, a master student in astronomy fortuitously discovered a group of galaxies in the very early Universe. In addition to demonstrating the potential of the software, the finding provides insight into the assembly of massive structures, as well as how some galaxies cease to form stars. 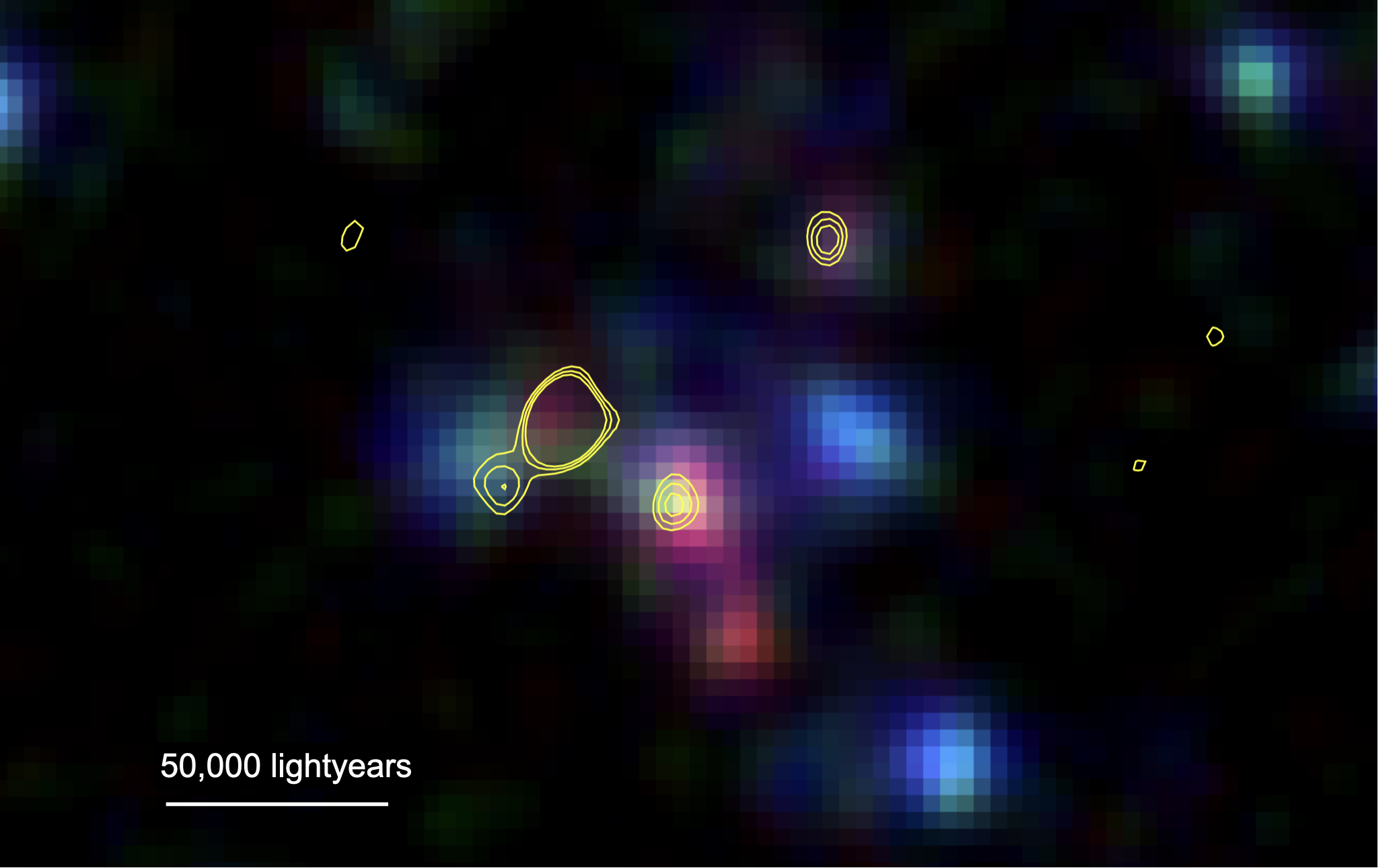 The (proto-) cluster of galaxies, seen 12 billion years back in time. The light is emitted from the galaxies' star and is in fact infrared. Because this light is invisible to the human eye, the colors have been "translated" to red, green, and blue. The yellow contours show emission of radio waves from stardust mixed with the gas between the stars. Credit: N. Sillassen.

Like most humans, galaxies do not like to travel the cosmos alone. Instead they tend to assemble in smaller groups or gagantic clusters that reside within the most massive concentrations of dark matter. Discovering and studying clusters and their galaxy members provide key insights into how galaxies evolve, but also into the underlying distribution of dark matter and the geometry of our Universe.

While developing a new software for automatic detection of distant galaxy clusters, Nikolaj Sillassen, master student at DTU Space and member of the Cosmic Dawn Center (DAWN) which is a collaboration between the Niels Bohr Institute and DTU Space, discovered a remarkable group of galaxies.

The group was dubbed "HPC1001" and consists of ten galaxy members that are seen 12 billion years back in time, when the universe was just 1.7 billion years old.

“I was testing the software on a new dataset, to verify that the algorithm I developed was applicable to a wide range of data, obtained by different telescopes and at different wavelengths. The near infrared emission of the HPC1001 structure immediately stood out among hundreds of thousands of other galaxies detected in the same part of the sky,” Nikolaj Sillassen explains.

One of Nikolaj Sillassen's collaborators is Shuowen Jin, Marie Curie Fellow at DAWN. He elaborates: “Galaxy groups so early in the history of the Universe are very rare. Only a couple of them have been found so far. Our discovery is interesting not only because HPC1001 is one of the most distant groups, but also because it is the most compact assembly of galaxies yet identified in our Universe”.

While some galaxies are actively star-forming, others rather suddenly cease to form new stars. One of the key goals of the Cosmic Dawn Center is to investigate the reasons and the evolution of this phase.

And also in this context, HPC1001 proved to be a treasure chest:

“Remarkably, the most massive galaxy member in this structure is ‘dying’ – its star-formation activity is declining,” says Georgios Magdis, who is an associate professor at DAWN and partaker in the study. “This is an important indicator for the evolution of massive structures, and if confirmed, HPC1001 would be the earliest discovered structure in maturing phase.”

The distance and "lookback time" to HPC1001 is determined by a somewhat uncertain technique that depends on the observed colors of the individual galaxies. To confirm their measurements, the astronomers will follow up their detection with more precise spectroscopic observations.

These future observations, obtained with the Atacama Large Millimeter Array in Chile and the Northern Extended Millimeter Array in France, as well as other astronomical facilities, will reveal the full nature of this structure, including whether HPC1001 will stay a small group, or will eventually evolve into a massive cluster of up to 1000 galaxies.

The galaxy group was discovered during a synthesis project at DTU Space, under the supervision of Shuowen Jin and Georgios Magdis. The results have been accepted for publication in the Astronomy & Astrophysics Letters with important contributions from other DAWN members and international collaborators.