Hubble spots most distant single star ever seen, at a record distance of 28 billion lightyears

Hubble spots most distant single star ever seen, at a record distance of 28 billion lightyears

Through a fortuitous alignment of distant galaxy with a massive foreground cluster of galaxies, astronomers from among other institutes the cosmic Dawn Center discovered a single star across most of the entire observable Universe. This is the farthest detection of a single star ever. The star may be up to 500 times more massive than the Sun. The discovery has been published today in the scientific journal Nature. 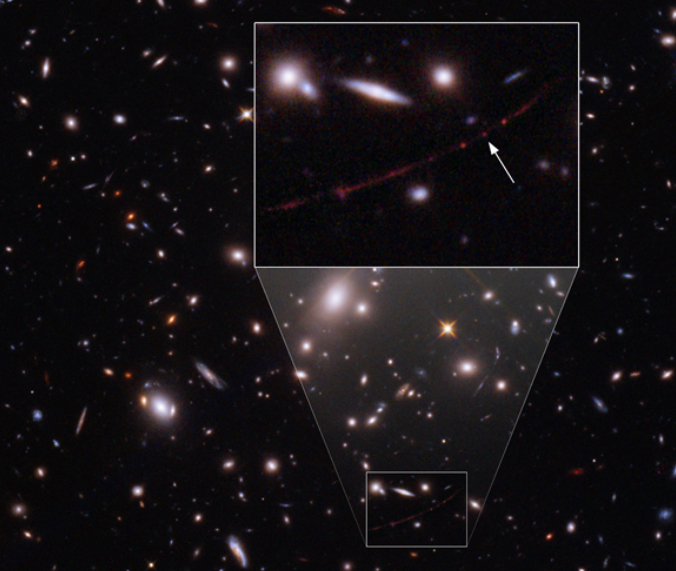 Close-up of the region on the sky, 1/250 of a degree across, where the gravity of a foreground cluster of galaxies magnifies the distant background star — nicknamed Earendel — thousands of times. Credit: NASA/ESA/Brian Welch (JHU)/Dan Coe (STScI)/Alyssa Pagan (STScI).

Gazing at the night sky, all the stars that you see lie within our own galaxy, the Milky Way. Even with the most powerful telescopes, under normal circumstances individual stars can only be resolved in our most nearby galactic neighbors. In general, distant galaxies are seen as the blended light from billions of stars.

But with the marvelous natural phenomenon known as "gravitational lensing", astronomers from the Cosmic Dawn Center at the Niels Bohr Institute and DTU Space were nevertheless able to detect a distance where even detecting entire galaxies is challenging.

A cosmic telescope predicted by Einstein

Among the wonders predicted by Einstein's theory of relativity is the ability of mass to "curve" space itself. As light passes close to massive objects, its path follows the curved space and changes direction. If a massive object happens to lie between us and a distant background source of light, the object may deflect and focus the light toward us as a lens, magnifying the intensity.

A massive galaxy cluster focuses and magnifies the light from a background galaxy (illustration: Peter Laursen).

Galaxies magnified several times are routinely discovered by way of this method. But in an astounding cosmic coincidence, the galaxies in a cluster named WHL0137-08 happened to line up in such a way as to focus the light of a single star toward us, magnifying its light thousands of times.

A combination of this gravitational lens and nine hours of exposure time with the Hubble Space Telescope enabled an international team of astronomers to detect the star.

The astronomers nicknamed the star Earendel, from the Old English word meaning “morning star”, or “rising light". They calculate that the star it at least 50 times as massive as our Sun, possibly up to 500, and millions of times as bright.

Besides being an astonishing achievement in itself, the observation of Earendel offers a unique possibility of investigating the early Universe:

"As we peer into the cosmos, we also look back in time, so these extreme high-resolution observations allow us to understand the building blocks of some of the very first galaxies," explains Victoria Strait, postdoc at the Cosmic Dawn Center, Copenhagen, and a collaborator and co-author of the study. She elaborates:

“When the light that we see from Earendel was emitted, the Universe was less than a billion years old; only 6% of its current age. At that time it was 4 billion lightyears away from the proto-Milky Way, but during the almost 13 billion years it took the light to reach us, the Universe has expanded so that it is now a staggering 28 billion lightyears away.“

The previous record is a star seen when the Universe was around a third of its current age, at which time most of its structure had already formed and evolved. So Earendel is indeed a ground-breaking record. 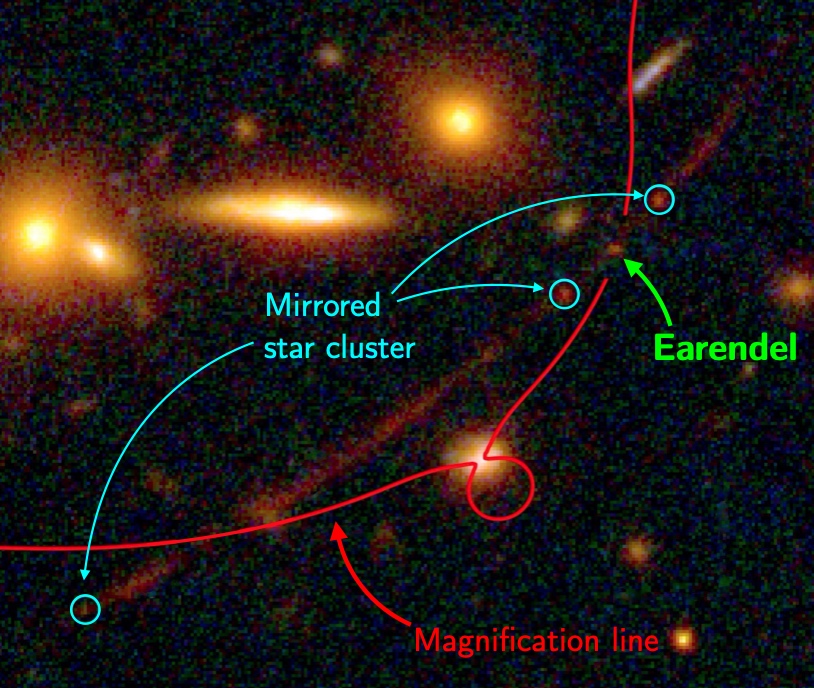 Close-up of the tiny region where Earendel happened to fall right behind the narrow region where the magnification increases by (tens of) thousands of times. A cluster consisting of many stars is seen slightly offset from the line, resulting in a much smaller magnification but instead being mirrored by gravity. Credit: NASA, ESA, Brian Welch (JHU), Dan Coe (STScI), Peter Laursen (DAWN).

A target for the James Webb Space Telescope

To measure the brightness of Earendel, the astronomers constructed a physical model of the gravitational lens. The exact nature of the light source depends on their model, but when the astronomers are so certain that the little dot is in fact a single star, it is in part because many different models all give roughly the same answer.

Nevertheless, Earendel could in principle be more than one star, located very close to each other. To test whether this is the case, the team applied for — and were awarded — observing time with the recently launched James Webb Space Telescope.

"With James Webb, we will be able to confirm that Earendel is indeed just one star, and at the same time quantify which type of star it is,” says Sune Toft, leader of the Cosmic Dawn Center and professor at the Niels Bohr Institute, who also participated in the study. “Webb will even allow us to measure its chemical composition. Potentially, Earendel could be the first known example of the Universe's earliest generation of stars.”