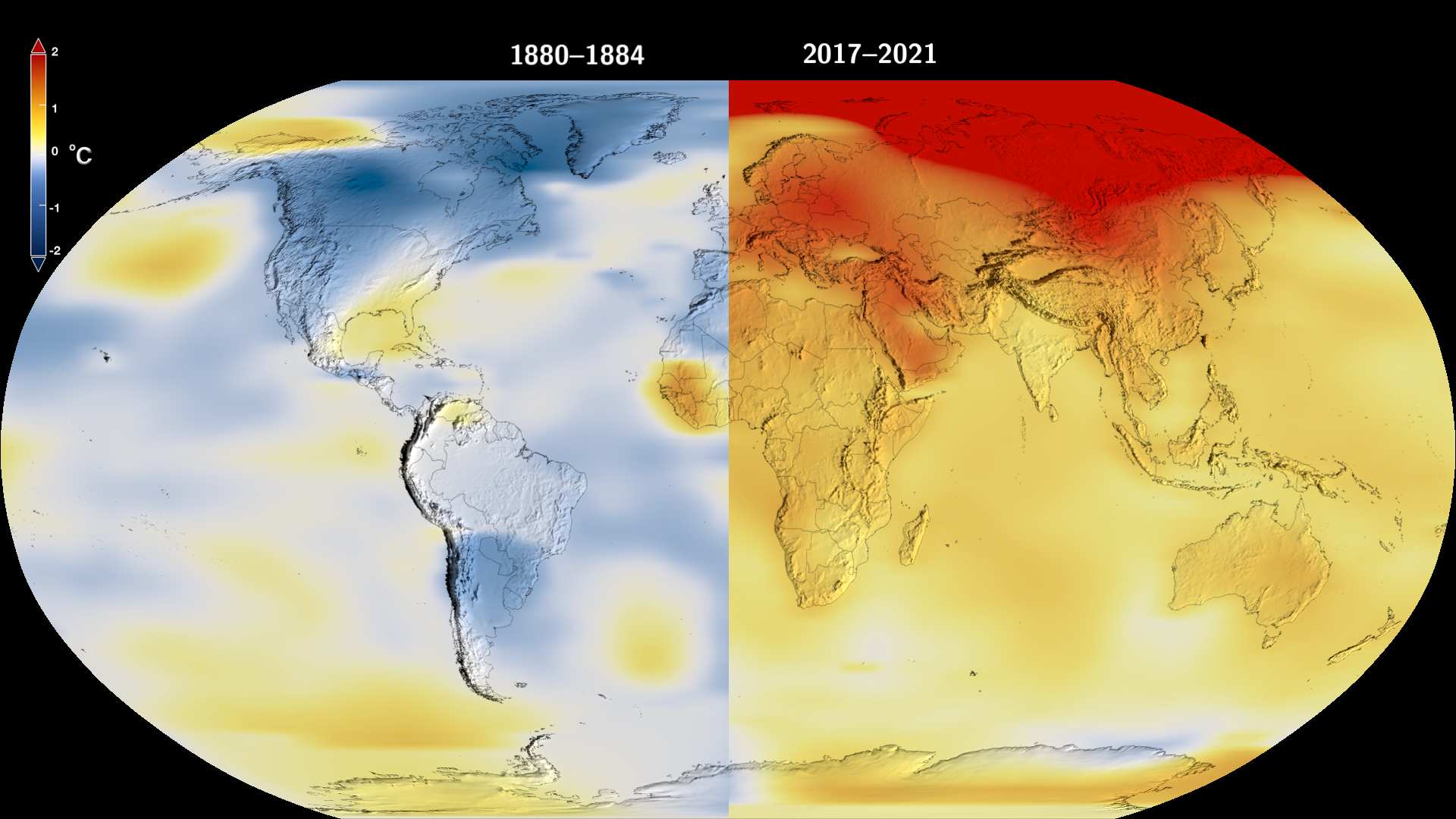 Local temperature fluctuations on Earth in the 1880s (left), compared to today (right). White colors show the average temperature during the period 1951–1980, while blue and red show colder and warmer temperatures, respectively. Globally, the temperature has increased roughly 1 °C over this period, but locally the variations may be greater or smaller. Now, new research sheds light on the link between these variations and the unstable weather. Source: NASA's Scientific Visualization Studio.

With over 99 percent agreement among climate scientists, it is now clear that Earth is warming globally and that this warming is predominantly human-made.

Temperature increases faster than ever before, and Earth is probably at its warmest for over 100,000 years. Since the beginning of the Industrial Revolution about 250 years ago, the world has become 1.1 °C warmer.

Climate change in recent years has given us extreme heat records, such as last year, when Canadians measured their highest temperature at almost 50 °C; five degrees warmer than the previous record!

But the problem is not limited to heat records: Cold waves, droughts, storms and precipitation also reaches new heights.

How global warming gives rise to local weather extremes is an active, though not yet fully understood, field of research. But with a new mathematical approach, master student Albert Sneppen just came one step closer to the connection between global temperature rise and the instability of local weather.

Albert Sneppen spends his time studying astrophysics at the Cosmic Dawn Center, a basic research center under the Niels Bohr Institute and DTU Space in Copenhagen, and is used to pondering on black holes and exploding stars. One day he got the idea that a method normally used to analyze the distribution of light on the night sky could also be used to study the distribution of temperature fluctuations on the Earth's surface.

The method is used in particular to interpret the so-called cosmic microwave background radiation, also known as the “Big Bang afterglow”. Suddenly Albert Sneppen saw a kind of "aesthetic coincidence" between heat distribution on the Universe’s scales and the Earth’s scales.

“For decades, the heat radiation of the early Universe has been studied in the night sky. Researchers use the so-called »angular power spectrum« which tells you how much all parts of the night sky — both locally and globally — are connected. And that is exactly what you want in climate research; a method of examining all scales of climate change at the same time,” Albert Sneppen explains.

The structure of climate

”When we humans perturb Earth’s temperature on the largest scales, it causes larger temperature differences on all scales from regions of about 2,000 km, and all the way down to 50 km,” Albert Sneppen explicates.

“The instability and volatility of the weather has generally grown since the industrial revolution, but has especially gained momentum over the last 40 years,” says Albert Sneppen. “Together with several other theoretical and observational studies, this model indicates that the weather will become even more unstable in the coming decades.”