While some galaxies form stars at a continuous rate, others die out and lead a more passive life. What made these galaxies stop forming stars at an early age is not well established, not the least because they are so distant and faint that they evade being observed. But looking at the combined light from thousands of galaxies, a team of astronomers including the University of Copenhagen showed that black holes helped turn off star formation. 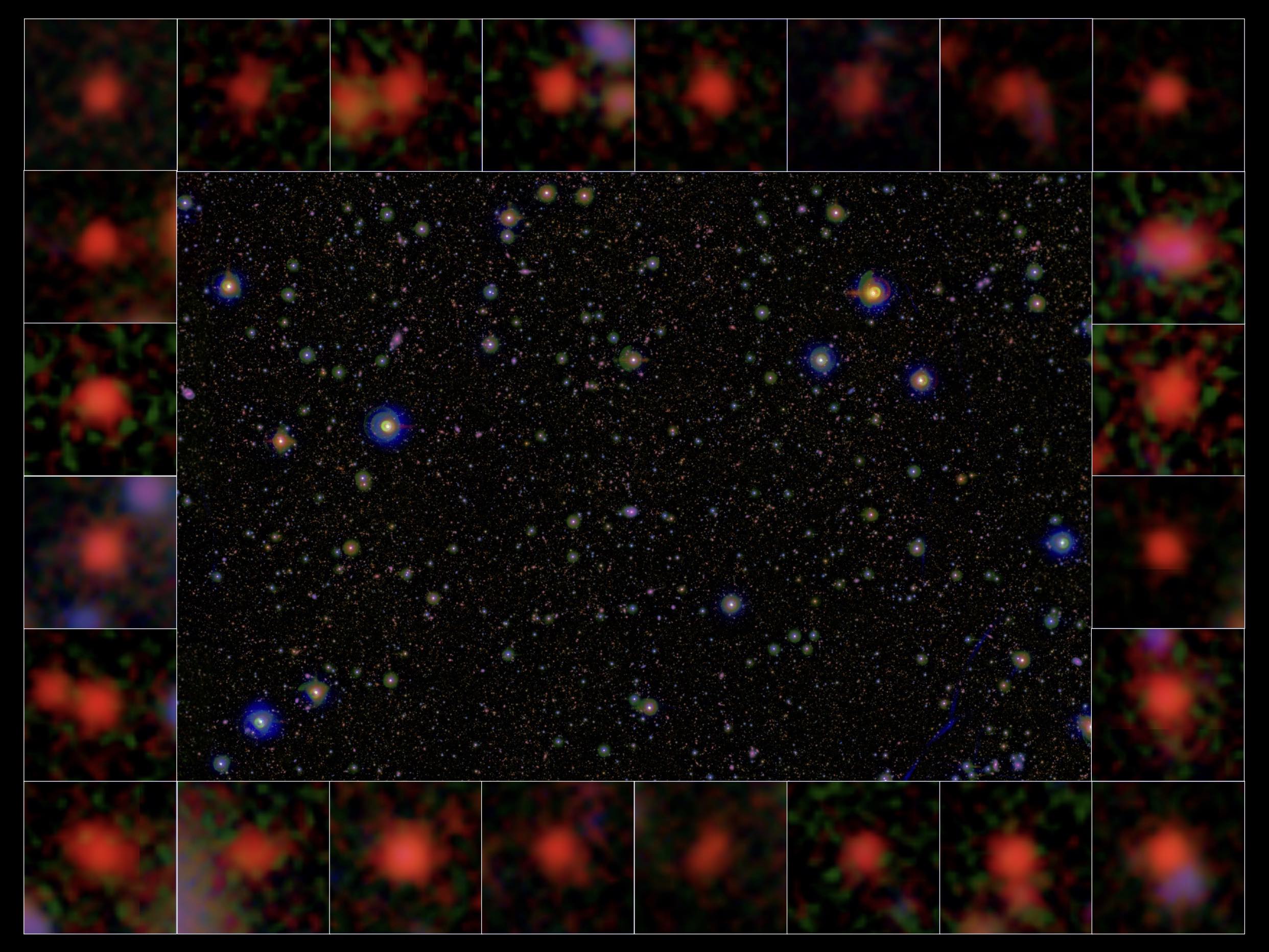 Hundreds of galaxies are seen in this region of the sky, called COSMOS. The most distant ones are seen as small, red specks, enlarged along the edge of the image. By “adding” all these galaxies a unified signal emerges, which has led scientists on the trail of the cause of the galaxies' death (credit: NAOJ).

Roughly once a year, a new star is born in our galaxy, the Milky Way.

Some galaxies form stars faster, and in the early Universe the most vigorous galaxies formed hundreds or even thousands of stars a year. However, others are somehow driven to the other extreme and completely stop forming new stars. Slowly their population of stars burn out, leaving only the small, reddish stars behind.

In particular in the early Universe, the reason for this so-called quenching is not well-established, although we know that it must have to do with the fuel for stars — cold gas — being depleted. But whether the gas is blown out of the galaxy, is heated to too high temperatures, or something else is going on, is uncertain.

Another question is why the galaxies stay quiescent: In the early Universe, the intergalactic space was full of gas which eventually should gravitate toward the galaxies, reviving star formation.

One possiblility is that a quiescent galaxy contains a supermassive black holes in its center, swallowing nearby matter and radiating excess energy away. This type of “active galactic nucleus” would be a low-luminosity version of the more energetic quasars. The emitted energy would nevertheless still be sufficient to heat the rest of the galaxy' gas, preventing the formation of new stars.

If this scenario is true, the galaxy should show a weak excess signal in X-ray and radio waves.

An international team of astronomers, led by postdoc Kei Ito at the SOKENDAI university in Japan, decided to test the hypothesis by digging through a catalog of galaxies observed in a particular region of the sky, dubbed the “COSMOS field”.

However, Ito and his collaborators faced an inherent problem in this approach:

Because of the time it takes light time to reach us, exploring early galaxies means observing distant galaxies, billions upon billions lightyears away. But distant galaxies are faint, and hence the signal, should it be there, in any individual galaxies of the COSMOS catalog is undetectable.

A stack of galaxies

“Although we lose the information about the state of any individual galaxy, we can now see their »average« properties. And the result is clear: A typical quenched galaxy 10–12 billion years ago hosted a low-luminosity, active galactic nucleus which may have played a crucial role in preventing rejuvenated star formation,” explains John Weaver, PhD student at the Cosmic Dawn Center, a research center under the Niels Bohr Institute, University of Copenhagen, and DTU Space.

John Weaver is one of several from the Cosmic Dawn Center who took part in the study. He recently led the effort of collecting, cataloging, and analyzing the 1.7 million galaxies in the COSMOS field.

“Now that we know the active galactic nuclei are there, we can target the galaxies individually. Future deep follow-up observations — for instance with the new James Webb Space Telescope — will provide more evidence for our proposed scenario,” concludes John Weaver.