Astronomers discover a swarm of galaxies orbiting a hyper-luminous galaxy

Astronomers discover a swarm of galaxies orbiting a hyper-luminous galaxy

Using the Very Large Telescope and the radio telescope ALMA in Chile, a team of astronomers including researchers from the Niels Bohr Institute has discovered a swarm of galaxies orbiting the surroundings of a hyper-luminous and vigorously star-forming galaxy in the early Universe. The observation provides important clues to how exceptionally bright galaxies grow, and to how they evolve into energetic quasars, beaming light across most of the observable Universe. 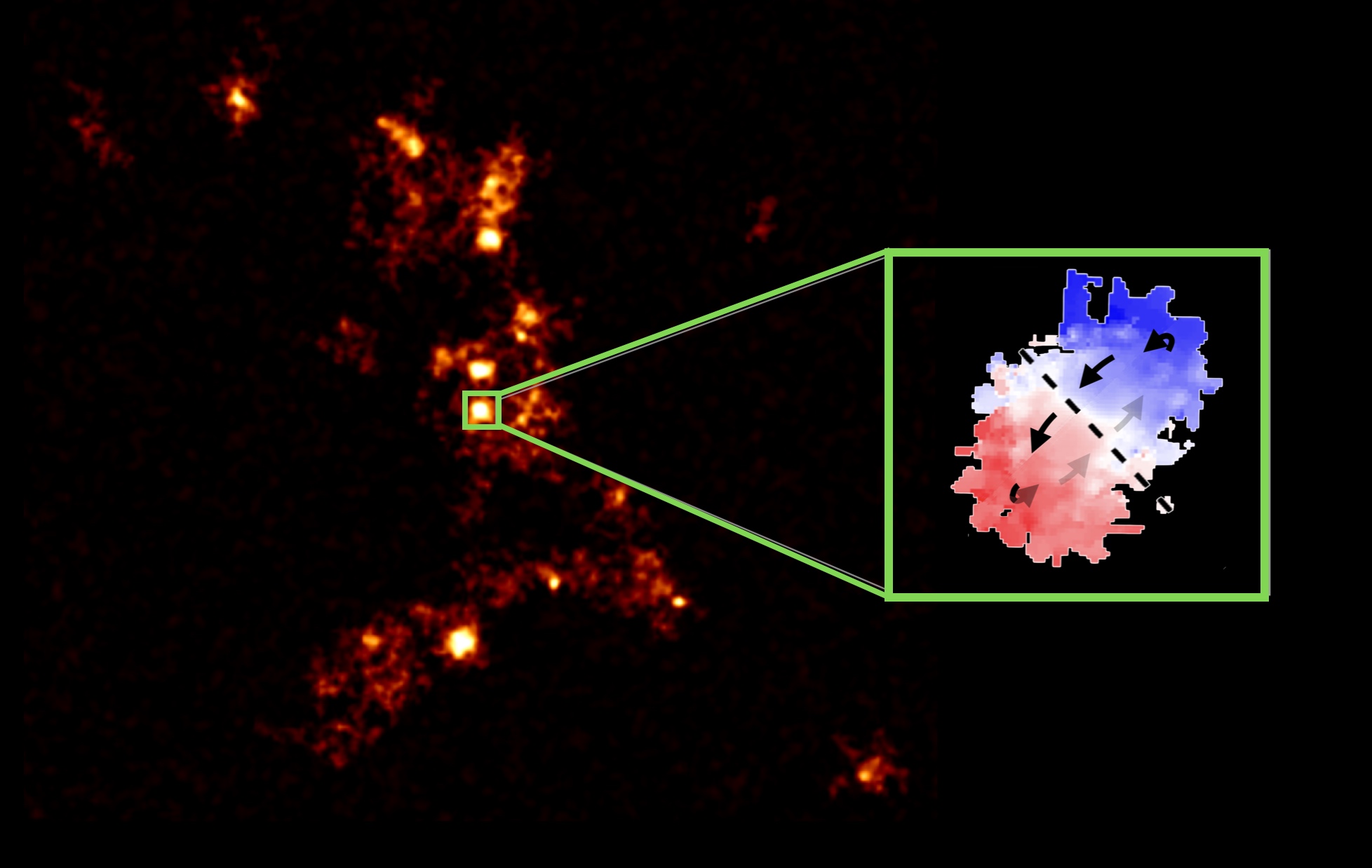 The massive, hyper-luminous galaxy W0410-0913 and its surroundings, seen 12 billion years back in time. The zoom-in on W0410-0913 shows a map of the velocity of the gas in the galaxy, more specifically carbon monoxide gas: Blue colors mean gas coming toward us, while red means receding from us. In other words, the galaxy is rotating. Credit: M. Ginolfi & G. Jones / VLT / ESO.

A fundamental issue in astronomy is the question of how galaxies form, grow, and evolve.

As a part of their evolution, most galaxies seem to foster a supermassive black hole in their center. These gravitational monsters occasionally swallow nearby gas and stars, spewing out excess energy as powerful jets, a phenomenon known as a quasar.

From galaxy to quasar

Many details about the transition from "normal" galaxies to quasars are still unknown. But in a new study, a team of astronomers led by Michele Ginolfi at ESO, Garching, may have come a step closer to understanding this evolution.

"Before evolving into a full-blown quasar, some galaxies are thought to go through a phase of being very dusty, and very ‘active’ in terms of star formation and accretion of gas onto their central, supermassive black holes," Ginolfi explains. "We set out to design an experiment to learn more about this transition phase."

Ginolfi and his collaborators focused on an already known galaxy, W0410-0913, one of the brightest, most massive and gas-rich galaxies in the distant Universe, seen 12 billion years back in time.

The dust is heated by the energy from starlight and the central black hole, making it glow and divulging the galaxy through its infrared light. This has led to this type of galaxies being called hot dust-obscured galaxies (also known colloquially as "hot DOGs").

Because the evolution of galaxies is inherently connected with their surroundings, Ginolfi and his team — whose core somewhat atypically consisted mostly of early career researchers — decided to observe W0410-0913 with the "MUSE" instrument at the Very Large Telescope (VLT) in Chile. This advanced tool allowed them to study a region 40 times wider than the galaxy itself.

Peter Laursen from the Cosmic Dawn Center in Copenhagen participated in the study. He explains: "The observations revealed that W0410-0913 is surrounded by a swarm of no fewer than 24 smaller galaxies. The cool thing about the MUSE instrument is that we can measure not only their position on the sky, but also their distance along our line of sight. In other words, we can measure their 3D positions."

Measuring both the speed of the individual galaxies and the motion of the central galaxy's internal structure requires a "spectrum" — an image where the light from an object is dispersed according to it wavelength.

An equally important reason that spectra are so useful is that they reveal other properties such as temperature and chemical composition of the gas. However, obtaining a spectrum is normally a rather time consuming task, requiring a long-exposure image for each point on the sky.

A so-called integral field spectrograph allows astronomers to cover the whole galaxy and its surroundings with a "grid" of spectrographs. The Multi-Unit Spectroscopic Explorer (MUSE) is such an instrument, mounted at the Very Large Telescope in Chile. MUSE is able to obtain no fewer than 90,000 spectra simultaneously, over a wide field of view. 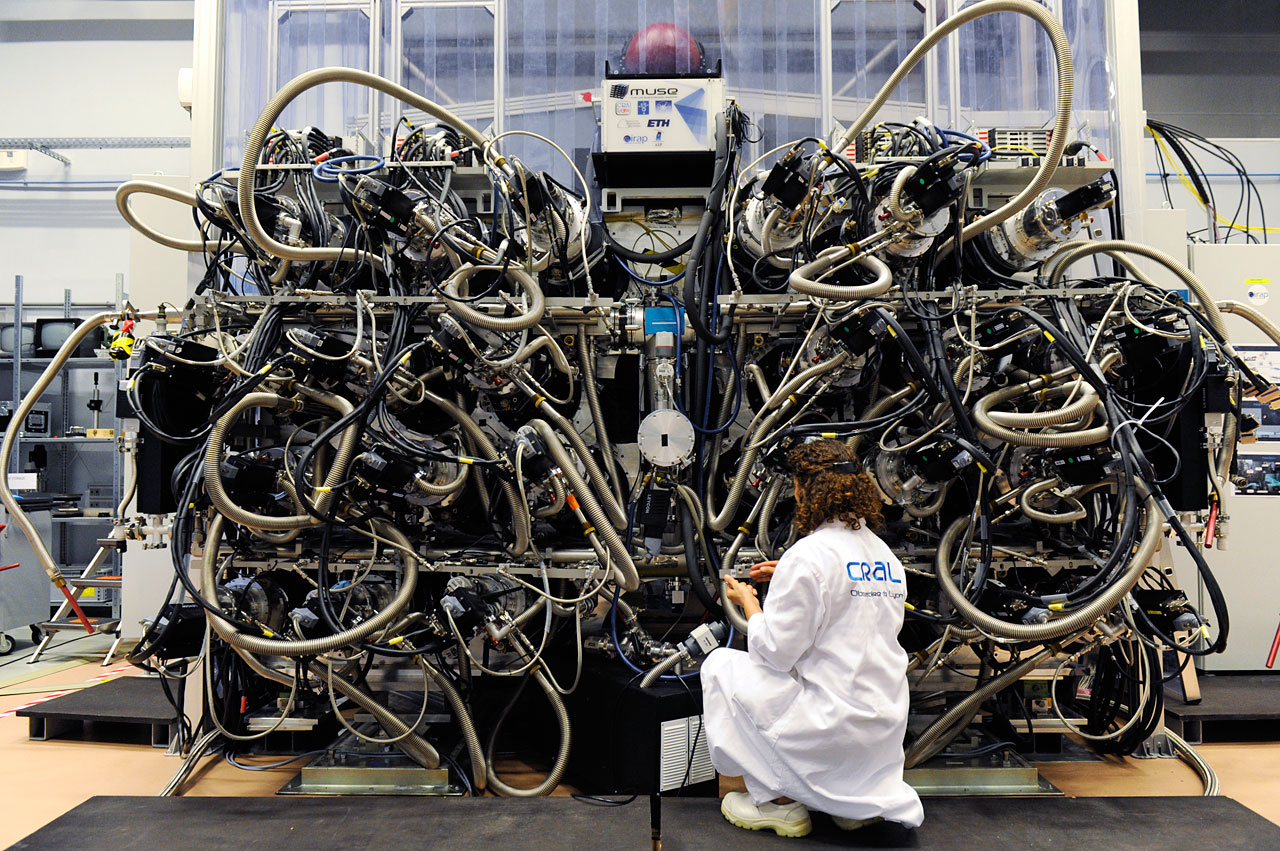 Although this implies that W0410-0913 resides in a region at least ten times more dense than the average Universe, this is not entirely unexpected, since hot DOGs are indeed thought to live in dense environments.

Galaxies in 3D: A three-dimensional stereographic view of the image shown in the beginning of this article: If you cross your eyes and focus on the blue sphere, which illustrates the galaxy W0410-0913, you should be able to get an idea the 3D position of all the other galaxies (might take a while to adjust). The squares in the back plane are 200,000 lightyears on each side The distance along the line of sight was estimated using the hydrogen Lyman alpha spectral line, but is uncertain due to the undetermined effect on the motion of the satellite galaxies by W0410-0913. Illustration: Peter Laursen.

Moreover, while W0410-0913 is seen at a time when the Universe was 1/8 its current age, it is already ten times as massive as our own galaxy, the Milky Way. Growing such a big galaxy in such short time, and feeding a supermassive black hole, does require a substantial supply of fresh material. This all fits well with the conventional picture that massive galaxies grow by accreting gas and satellite galaxies, attracted from intergalactic space by their immense gravity.

In fact, in such a dense environment, the rate of galaxy interactions and merging is expected to be very high. Exposed to such a bombardment, the astronomers anticipated  W0410-0913 to be a car wreck of chaotically whirling clumps of gas and stars.

However, digging into old observations obtained by the ALMA radio antennae located only 300 km north-east of the VLT, Ginolfi and his colleagues were able to measure the internal motion of the gas inside W0410-0913.

Throwing pebbles at a glass pane

Surprisingly, the ALMA observations revealed that W0410-0913 seems not to have been disturbed by interactions with companion galaxies at all. According to the observations, is gas rotates nicely and orderly around the central black hole. Orderly, but amazingly fast, with speeds reaching 500 km/s!

"Coupling the results from the two very different telescopes, we see a picture of how the most massive and dusty galaxies may evolve. This type of galaxies, a vital stage in the transition from a dusty and star-forming galaxy to a quasar, tends to grow in very dense environments." Ginolfi says. "Nevertheless, despite the expected frequent merging with other galaxies, these gravitational interactions are not necessarily destructive — they feed the central galaxy and whirl up the gas a bit, but leave it practically intact. A bit like throwing small pebbles against a pane of solid glass: you may scratch it, but won't break it…"

Michele Ginolfi's observations offer first clues on the multi-scale process that drive the evolution of the rare and extreme population of hot dust-obscured galaxies. They grow in dense, special habitats, but the interaction with their companions can be gentle.

As a parable to this galactic car crash, the study came close to not being conducted at all, when Michele Ginolfi got stuck in a traffic jam in Rome's traffic, having to submit the proposal using his phone from his car, minutes before the deadline.