Using the Atacama Large Millimeter/submillimeter Array, astronomers at the Cosmic Dawn Center at UCPH/DTU found a rotating baby galaxy 1/100th the size of the Milky Way at a time when the Universe was only 7% of its present age. Assisted by the "gravitational lens effect", the team was able to explore for the first time the nature of small and dark "normal galaxies" in the early Universe, representative of the main population of the first galaxies. 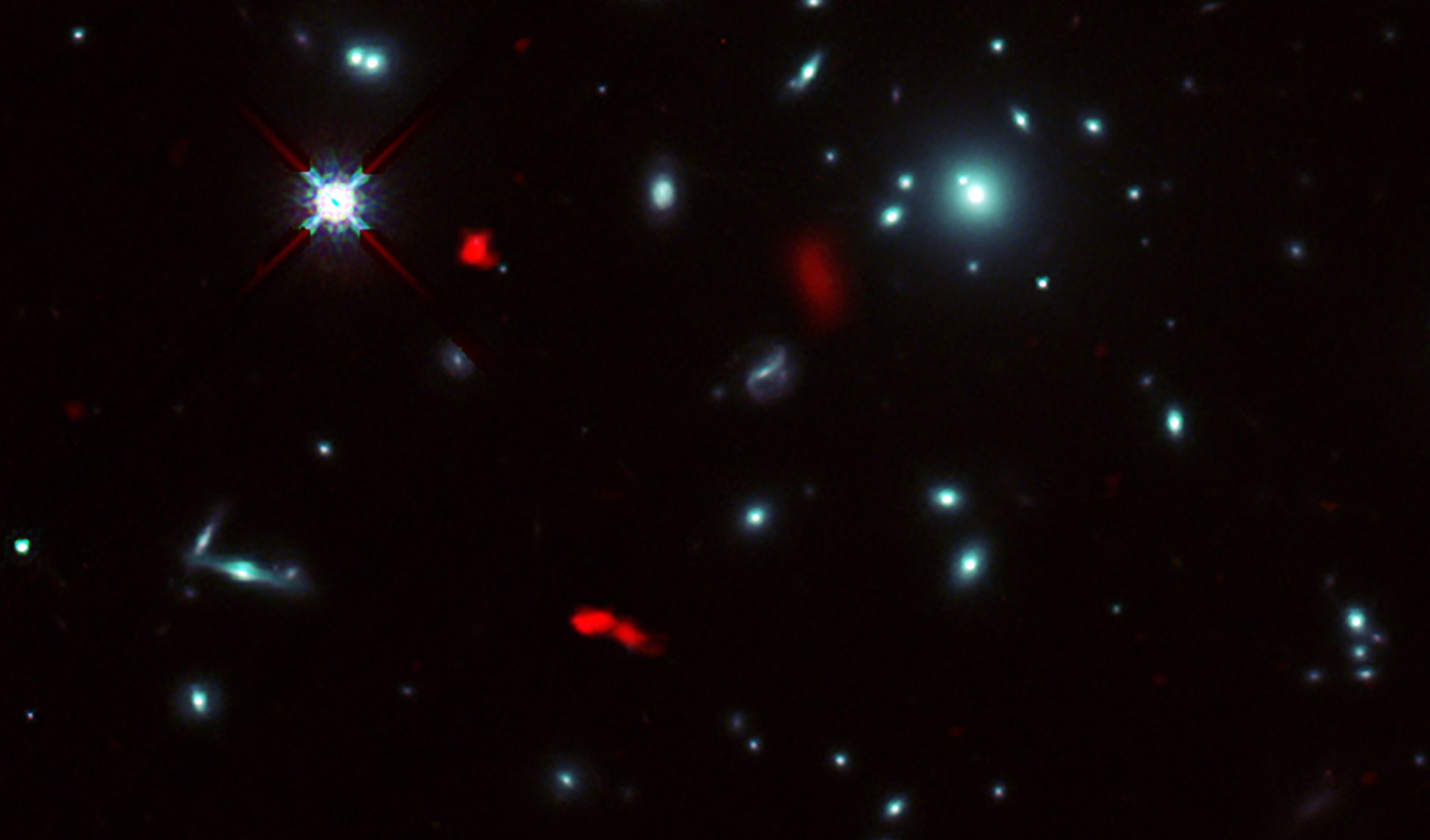 Image of the galaxy cluster RXCJ0600-2007 taken by the NASA/ESA Hubble Space Telescope, combined with gravitational lensing images of the distant galaxy RXCJ0600-z6, 28 billion lightyears away, observed by ALMA (shown in red). Due to the gravitational lensing effect by the galaxy cluster, the image of RXCJ0600-z6 was intensified and magnified, and even appeared to be divided into three or more parts.
Credit: ALMA (ESO/NAOJ/NRAO), Fujimoto et al., NASA/ESA/HST.

"Gravitational lensing" is a natural phenomenon in which light emitted from a distant object is bent by the gravity of a massive body such as a galaxy or a galaxy cluster located in the foreground; the mere gravity of the massive object acts like a lens. When we look through a gravitational lens, the light of background objects is intensified and their shapes are stretched. In other words, it is a "natural telescope" floating in space.

The ALMA Lensing Cluster Survey (ALCS) is an observational program that combines the power of the Atacama Large Millimeter Array — an array of 66 radio telescopes in the Chilean Atacama desert — with the effect of gravitational lensing, with the aim of uncovering and studying faint galaxies in the early Universe.

"We are small but we are many"

Why is it crucial to explore the faintest galaxies in the early Universe?

Theory and simulations predict that the majority of galaxies, formed a few hundred millions years after the Big Bang, are small and thus faint. Although several galaxies in the early Universe have been observed before, those studied were limited to the most massive, and therefore less representative, galaxies. To understand the formation of the first galaxies, and obtain a complete picture of galaxy formation, we must focus on the fainter, more typical galaxies.

In a study led by DAWN postdoc Seiji Fujimoto, the ALCS team focused on a galaxy cluster with a staggering mass of 1000 trillion times that of our Sun. The cluster turned out to have a particularly favorable line-up with a single, distant galaxy.

The light from carbon ions and stardust in this galaxy revealed that it is seen as it was about 900 million years after the Big Bang. Further analysis of the data suggested that a part of this source is seen 160 times brighter than it is intrinsically.

By precisely measuring the mass distribution of the cluster of galaxies, it is possible to “undo” the gravitational lensing effect and restore the original appearance of the magnified object. In this way, the team determined the total mass of this galaxy to be about 2 to 3 billion times that of the Sun, which is about 1/100th of the size of our own Milky Way Galaxy. 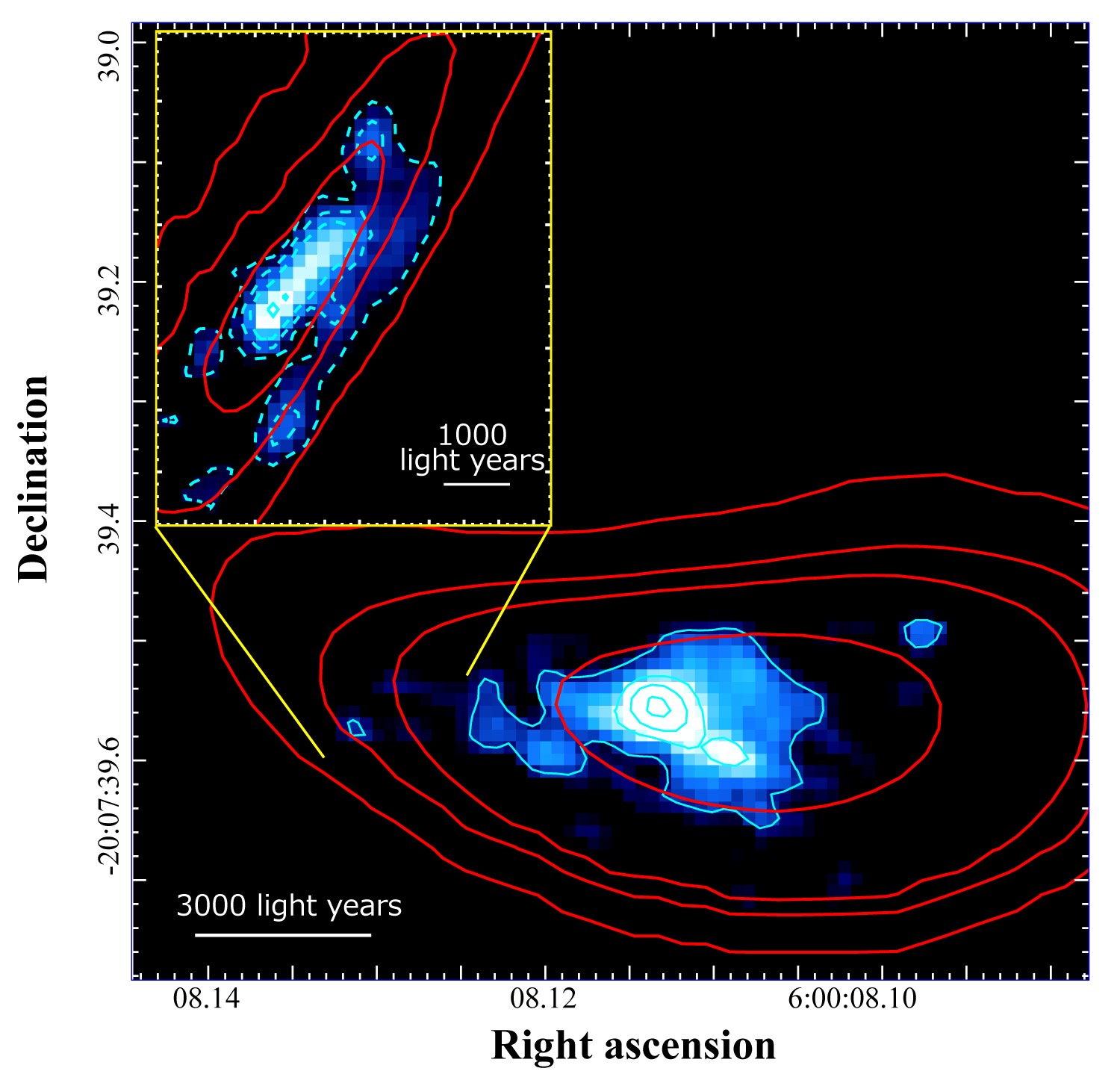 Reconstructed image of the distant galaxy RXCJ0600-z6 by compensating for the gravitational lensing effect caused by the galaxy cluster. The red contours show the distribution of radio waves emitted by carbon ions captured by ALMA, and the blue contours show the spread of light captured by the Hubble Space Telescope. The critical line, where the light intensity from gravitational lensing is at its maximum, runs along the left side of the galaxy, so this part of the galaxy was further magnified (inset image). Credit: ALMA (ESO/NAOJ/NRAO), Fujimoto et al., NASA/ESA/HST.

What astonished the team is that RXCJ0600-z6 is rotating. Traditionally, gas in the young galaxies is thought to have random, chaotic motion. Only recently has ALMA discovered several rotating young galaxies that have challenged the traditional theoretical framework, but these were several orders of magnitude brighter (and hence larger) than RXCJ0600-z6.

The magnification of RXCJ0600-z6 is unusually high, allowing the astronomers to study it in details down less than 1000 lightyears. Although this sounds like a lot, it is quite amazing given the galaxy's large distance. In fact, it corresponds to being able to spot a seagull at a distance of 1000 km.

And with future telescopes, we will be able to probe even smaller details.

“The fact that RXCJ0600-z6 has a very high magnification factor also raises expectations for future research,” explains Seiji Fujimoto. “This galaxy has been selected, among hundreds, to be observed by the James Webb Space Telescope, the next generation space telescope to be launched this autumn. Through joint observations using ALMA and James Webb, we will unveil the properties of gas and stars in a baby galaxy and its internal motions. When the Thirty Meter Telescope and the Extremely Large Telescope are completed, they may be able to detect clusters of stars in the galaxy, and possibly even resolve individual stars.”

Seeing individual stars is usually only possible in the Milky Way's most nearby neighbors. But with lensing, we can sometimes be lucky and study single stars across most of the Universe.