After half a year of frequent new candidates for the most distant galaxy ever seen, astronomers have finally acquired the conclusive evidence: a spectrum, allowing the researchers to measure the exact wavelengths of the light emitted from the galaxies in the past, and hence to determine their distances unambiguously. Four galaxies have been confirmed, with the most distant one seen only 320 million years after the Big Bang. 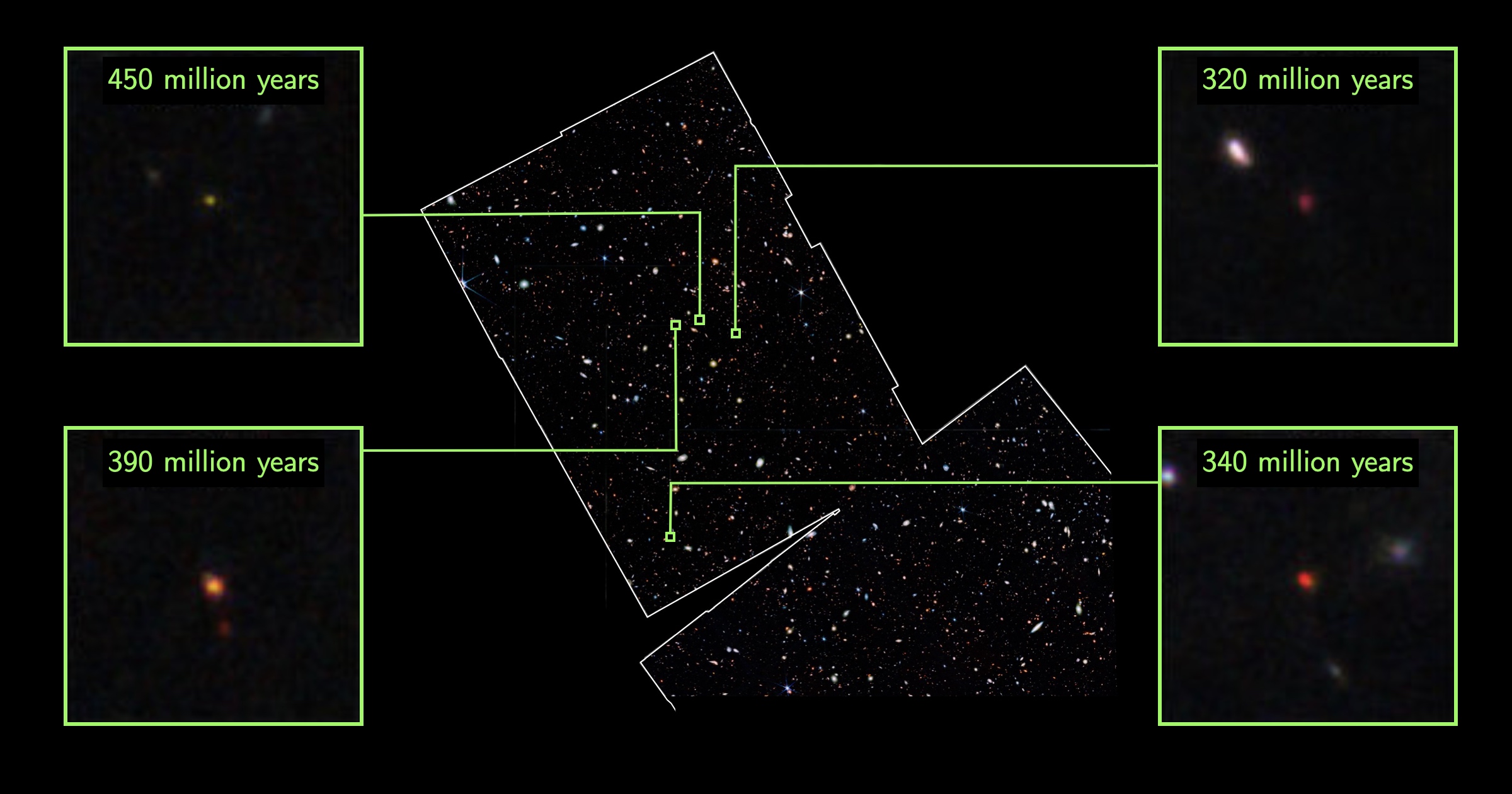 NOTE: This article describes work which has not yet been accepted for publication.

It’s the moment we have all been waiting for:

Since the James Webb Space Telescope began its science observations in July, numerous reports of distance record-breaking galaxies have been posted on the preprint server arXiv.org.

Not only were the galaxies supposedly farther away — and hence seen farther back in time — than ever before. They also seemed to be so massive that they defy the “standard model” of the Universe, challenging our understanding of how, and how fast, structures grew in the early epochs of the Universe.

Recently, then, the two first reports passed the mandatory peer review and were published in scientific journals, but so far, all those galaxies have only been “candidates”. The technique used to determine their distances was a fast, but somewhat unreliable, method that gives an approximate distance, and is known to sometimes confuse more nearby galaxies with distant ones.

To unequivocally determine their distances, the more reliable method known as spectroscopy is needed. A spectrograph disperses the individual particles of light in a rainbow of colors, allowing the researchers to measure their exact wavelengths.

Different atoms emit light at specific wavelengths, and the spectra thus tells us not only which elements are found in the galaxy, but also many other properties such as their temperature, the motion of their gas, and — most importantly — their distance.

There’s just one problem: Galaxies at these early epochs haven’t had much time to produce any elements beyond the hydrogen and helium from which they were born. Additionally, they are so immensely far away that their faintness makes them very difficult to observe.

Peter Jakobsen is an affiliate professor at the Niels Bohr Institute and the Cosmic Dawn Center, and the former project scientist for ESA’s NIRSpec spectrograph, one of the four infrared instruments onboard the James Webb Space Telescope. He participated in both studies.

“We pointed NIRSpec at a small region of the sky known as the Hubble Ultra Deep Field for 28 hours and obtained a total of 250 spectra from faint galaxies spanning a large range of distances. The four most distant ones stood out from the others in that their spectra did not show any emission lines,” Jakobsen explains.

Nevertheless, the astronomers were still able to use the spectrum to obtain an unambiguous evidence of their distance: Because gas in the early Universe absorbs all light below a certain threshold wavelength, the spectra contains a “break” which can be measured precisely. 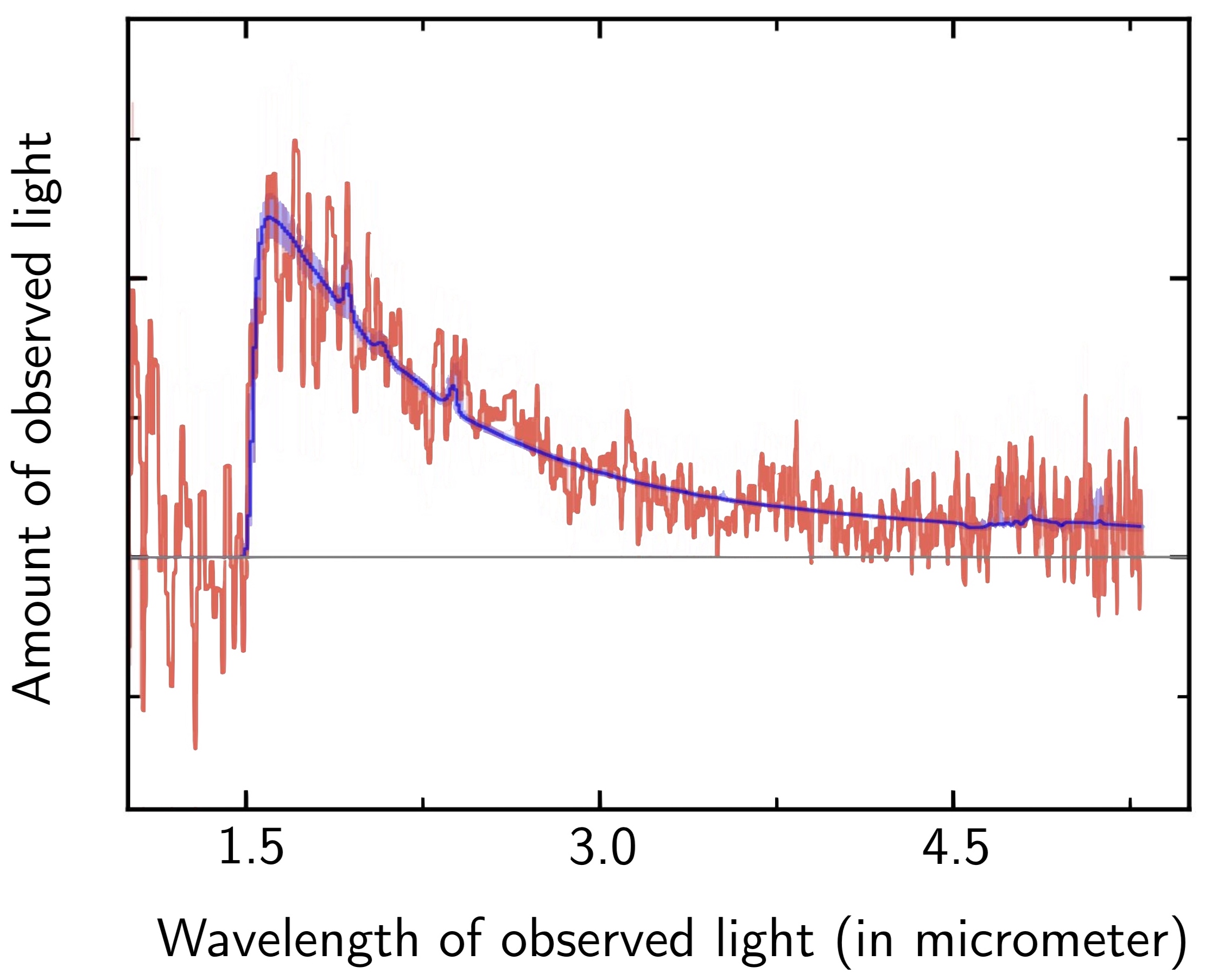 The red line shows the spectrum of one of the four galaxies, called JADES-GS-z10. The blue line is a model. Perhaps not as beautiful as an image, this figure is extremely informative: The intensity of light increases toward shorter wavelengths, but suddenly, at wavelengths shorter than about 1.5 micrometer, it drops sharply. The exact wavelength where this happens allows the astronomers to calculate its distance. Credit: E. Curtis-Lake et al. (2022).

Nina Bonaventura, postdoc at the Cosmic Dawn Center, also participated in the study. “It is incredible to realize that the light from these galaxies traversed the Universe for 13.5 billion years before being captured by Webb’s 25-square-meter mirror and dispersed into a rainbow of infrared colors by NIRSpec,” Bonaventura describes enthusiastically. “These rainbows allow us to undeniably confirm their vast distances through identification of a characteristic sharp break in the light spectrum.”

Novel algorithms in the software, developed by Jakobsen and Bonaventura to optimize NIRSpec observations, ensured that the maximum number of galaxies were observed in a single pointing and exposure.

No need to fix the standard model (yet)

The most distant of the four, dubbed JADES-GS-z13-0, is seen so far back in time that the Universe was only 320 million years old. Since the first stars and galaxies are thought to have formed 100–200 million years after the Big Bang, this is a significant step closer to the beginning than the previous record-holder, GN-z11, which is seen at 420 million years.

In addition to the distances, the astronomers could also use the light to infer the galaxies’ masses. And here it seems that they are not so extreme as some of the first reports found for the still un-confirmed galaxies.

“The NIRSpec spectra indicate that the four galaxies contain tens to a hundred million Suns of mass, and were formed less than 100 million years before the time at which we observe them,” Peter Jakobsen explains. “This is precisely the type of observation that, more than 20 years ago, we designed Webb and Europe’s NIRSpec instrument to be able to do. It is immensely gratifying to see it all finally happening. And this is only the beginning.”

Nina Bonaventura agrees: “It is remarkable to witness the human ingenuity that led to the flawless launch of Webb, the spectacular performance of its instruments, and the software and algorithms that optimize the scientific return of Webb data, all of which was required to achieve such ground-breaking science results,” she concludes.

The papers have been submitted, but are not yet accepted for publication.